I Am the Ostrich, Coo Coo Ca Choo. 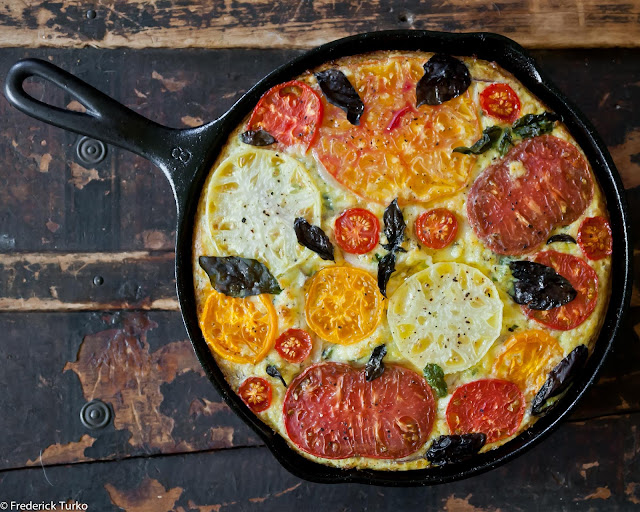 When I was in college, a group of us in Victor Garcia’s Spanish class went on a trip to Mexico – ostensibly to study the language while immersed in its culture. Fortunately for me, a lot of my closest friends, and my boyfriend, Paul, were in that group. I also had a pretty big crush on Victor Garcia. Not the kind where I wanted to get in his pantalones, but more the kind that I just wanted to be part of his life, his family. He was just so great. And his wife and son were great, too. Very happy. And, he was so attractive.


The program took place in Cuernavaca. We were all assigned and lived with ‘host’ families during the stretch of this program. There were four of us in my house. I shared a room with Carl, who, on that trip, became Ray Ray (he bought a pair of Ray Ban’s from a street vendor and later discovered that on the lens read Ray Ray’s in lieu of Ray Ban’s. The die was cast. He was forever Ray Ray.)  Ray Ray was a short, bald, black, flamboyantly gay young man. At the time I had cut my hair off (myself) into, what I thought would be, a pixie cut, and dyed it canary yellow (myself). And so, in traditional, machismo-infested Mexico, the six-foot tall girl with the cut-off jean shorts, Pac-Man tee shirt and canary yellow hair and the short bald, flamboyantly gay black man roamed the streets. We most definitely got rocks thrown at us from passengers on buses.

I will say, however, that my Spanish was great during this time - though more from hanging out and drinking beer and tequila in the bars with the locals than as a result of the program. Or maybe that was the program…

After the ‘school’ part of the trip, a core group of my friends and I split off and went rogue, exploring Mexico the way we wanted: backpacks, hostels in cities, hammocks on the beach, café con leche, homemade mescal, and a lot of bouts of Gin Rummy. Very late one night, I believe we were in Oaxaca; Amy, Paul, Mike, Ray Ray and I were sitting in our hotel room, drinking tequila, smoking and playing round after round of Gin Rummy. At some point during this evening, at some ungodly hour, we all decided to figure out our animal. We became fixated on getting them just right and spent hours doing so. Here’s what we settled on: Amy was an owl, Mike was a walrus, Paul was a koala bear, Ray Ray was a jaguar, and me – I was an ostrich. What a gyp! I couldn’t even get to be a flamingo? Nope, I was an ostrich.

It made sense, I suppose. I was very tall, awkwardly skinny, had that whole hair situation and I was certainly not the most graceful bird in the land. To be fair, I don’t think Paul was feeling very masculine about being a koala bear. But it really did fit.

Wondering how I’m going to wrap this one back around, aren’t you… 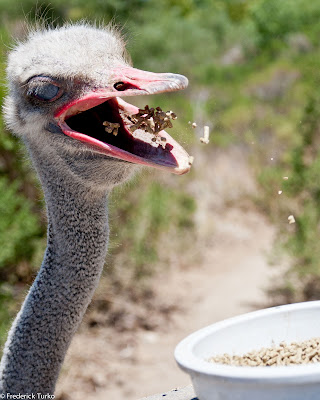 About seven or so years ago, I started going to Santa Barbara County for little trips, long days, short weekends, etc. for wine tastings and micro-getaways. I have been with a few people, and I’ve been by myself. I love the tasting rooms, the wineries, the landscape, the food, the people, the drive up and the drive back. It’s very dear to me. There is a pretty cool place in between The Hitching Post, in Buellton and the little, Danish Colony in Solvang. It’s called Ostrichland. Yes, it is. Ostrichland!

Used to be you could roll right up and see, touch, feed, and be bitten by, the birds (they have emu and ostriches). Now you have to pay. But a measly $4.95 is more than worth all that one experiences in Ostrichland. Did you know that ostriches have the ability to run at maximum speeds of 43 mph, the fastest land speed of any bird? And, the Ostrich is the largest living species of bird and lays the largest egg of any living bird!

The largest egg in all the land? I clearly had to have one. So, at about $30 a pop, I bought one ostrich egg that is the equivalent to approximately twenty chicken eggs.

Other than turning the shell of the egg into a lamp base or some such thing, what was I going to do with an egg that big? This question plagued me for quite some time. So much time, in fact, that I realized I had better do something with the egg or it would simply go to waste, and all I would have is the shell with which to make a lamp base or some such thing. I needed to move fast as y’all all know how much I loathe to waste food.

While I really did like the idea of one, ginormous deviled egg, I realized I would have to make scramble-ness with the egg if I wanted to keep the shell intact for my lamp base (or some such thing). I looked around and saw my rainbow of heirloom tomatoes and it hit me: frittata.

And so Fred and I went about making the most enormous frittata of all time. For the two of us. It was a really interesting process, getting the eggy insides out without compromising the shell. The dish took the better part of the morning to cook through as it was a LOT of egg. It filled an entire, large, cast-iron skillet almost to the top. I guess you could say it was really more of a crustless quiche. And it was very tasty. While I couldn’t decipher a real difference in the taste of the egg from that of a chicken egg, I will say that it was much fluffier and lighter than a chicken egg. 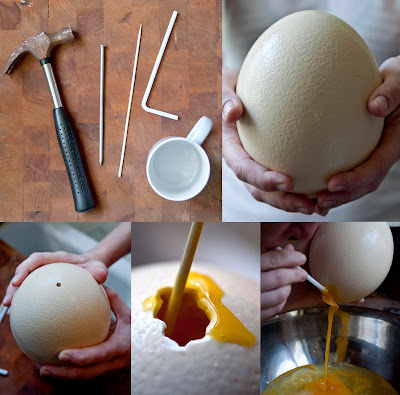 And now I have the shell. I can’t imagine what on earth I’ll do with it. But I like it.

So here’s the deal; after my multiple visits to Ostrichland and bonding with its residents, I guess my animal being the ostrich is not so bad. I’m not really that gawky and lanky any more, but I’m still pretty tall. My hair is not hacked off my head in my personal attempt to resemble Mia Farrow in Rosemary’s Baby, nor is it canary yellow. I can’t run all that fast, nor do I really try. But, like the ostrich, I’m kind of goofy, kind of awkward, not very graceful, love to eat, and have my own brand of cuteness and allure. I have also been known to bite. 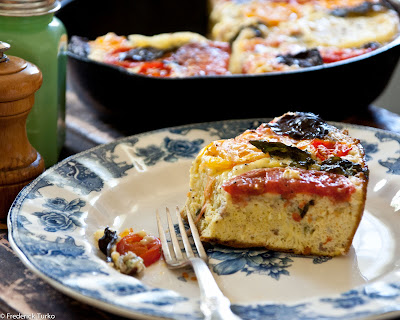 For the recipe below I am providing you with the recipe with the standard measurements rather than the ginormous ostrich egg version. If you would like to try this with an ostrich egg, multiply everything by four...

Brown sausage in a 10-inch (2-inch-deep) ovenproof skillet over medium-high heat, stirring often, 7 to 8 minutes or until meat crumbles and is no longer pink; remove from skillet, and drain. Wipe skillet clean.
Heat oil in a large skillet over medium-high heat. Lightly beat eggs in a medium bowl. Stir in sausage, cheese, pistou basil and garlic, cubes of butter and season with salt and pepper. When oil is shimmering, pour egg mixture into pan and cook until eggs begin to turn golden brown around the edges. Arrange tomato slices, red onion cirlces and basil leaves on top of egg mixture. (Some tomato slices may sink.)
Transfer skillet to oven and bake frittata until eggs are just set in the center, 10-12 minutes. Using a heatproof spatula, loosen frittata from pan and slide onto a warm plate. Slice and serve warm or at room temperature.
Printable recipe.