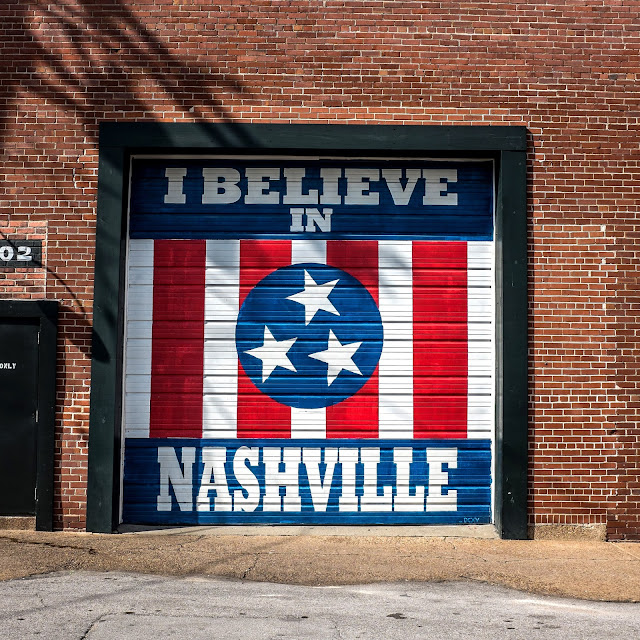 Nashville is hot stuff right now - it's quite the culinary darling, actually. In addition to our hefty list of restaurants to visit, one of my closest friends from LA, Chris, is from Nashville, and his family all live there. His brother-in-law runs a restaurant that I had been hearing about for some time.


Unfortunately for me, somewhere between New Orleans and Nashville I acquired one super nasty cold (that fortunately – and bizarrely – only lasted twenty-four hours). But we had reservations at Rolf & Daughters, and by gum, we were sticking to it. Even through a super hero dosage of cold medicines, I was able to appreciate the atmosphere, service, food and wine. As per usual, I ordered the chicken. But alas, we were not long for the world that night, and right after dinner, hurried back to the hotel to rest up for the next few days in town. And our next stop was going to be Chris' brother-in-law's restaurant; Fido.

In 1993, way before local, sustainable, organic, farm to table took root (think Pearl Jam-era), Fido was launched as part of the unofficial Bongo World and consists of a wholesale coffee roasting company and four cafes – each having a unique identity and menu. Their coffee is 100% organic and bought directly from Fair Trade small-farm co-ops. Fido is both coffee shop and restaurant, nestled in Nashville’s Hillsboro neighborhood. Well known for their fish tacos, the Local Burger and their sweet potato fries, and with dishes like a grilled Tennessee cheddar and country ham sandwich and baked cheese grits, Chef John Stephenson offers a fresh, local menu which simultaneously breaks away from, and pays homage to, traditional southern fare.

Fido got its name from the pet store that previously occupied their space and is, no surprise here, dog-friendly. This was a huge plus for us traveling with two of our canine boys, Eduardo and Byron. Right around lunchtime on a recent weekday, the four of us laid claim to one of the precious tables outside before we went in to peruse the menu and place our order. And out popped Chris' brother-in-law, Chef John himself – lucky for us he was manning all of the food coming out of the kitchen that day. So we ordered a lot: the Local Burger with sweet potato fries, the last of the season heirloom tomato salad with fresh figs and blue cheese, tomato-basil soup with focaccia, grilled salmon with polenta, mache, berries and feta, the special plate of the day which had a sampling of a couple Southern staples: green bean casserole, succotash, and finally a hefty slice of pumpkin cheesecake. 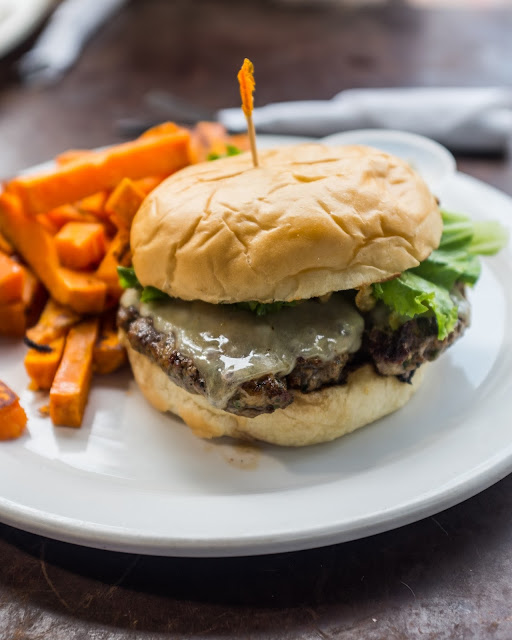 Their most popular dish is the Local burger with sweet potato fries, is fantastic. It's made with Tennessee beef and local lamb, Swiss cheese, pickles, onion strips and a zesty sauce. The meat was seasoned with a beautiful blend of spices. The bread was an ideal texture and there wasn't too much of it to eclipse the meat. The sweet potato fries were grilled, made from sweet potatoes on site, were tender, soft and delicious. 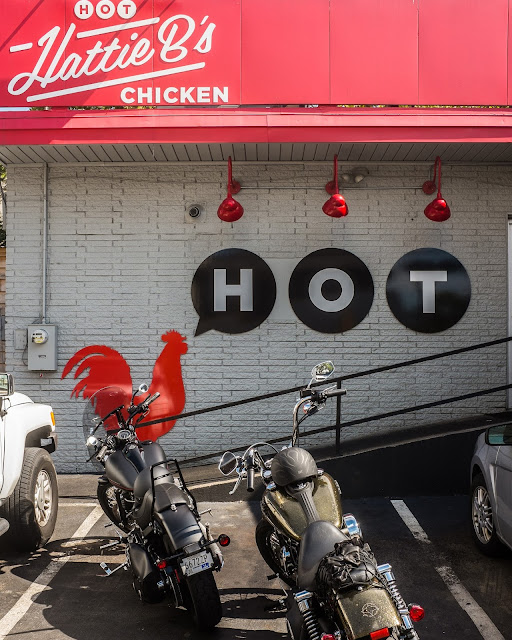 We saw John and his family quite a bit during our three nights in Nashville. We hit the hotspots and the nightspots and the old tried and true spots. We heard rad, live music, went to a farmers' market and I even bought a beautiful, new handbag from a local designer that Chris' sister, Katherine, turned me on to. But culinarily, two things in Nashville really stood out to me; Fido and another joint Katherine and John sent us to: Hattie B's Hot Chicken. It was my first Hot Chicken experience and it was memorable. We sat outside (again with the pups) and stared down at our massive platters of Nashville-style fried chicken: marinated in buttermilk, breaded, sauced using a paste that had been heavily spiced with cayenne pepper, then pan-fried and coated in 'damn hot' sauce. It is served atop slices of white bread with pickle chips with traditional Southern sides like collards, black-eyed pea salad, fried okra, pimiento mac n cheese, and tea so sweet it hurts your teeth. Fred, of course, ordered his hot chicken as hot as he could and was on fire after two bites in. But we loved it. We felt so Nashville. 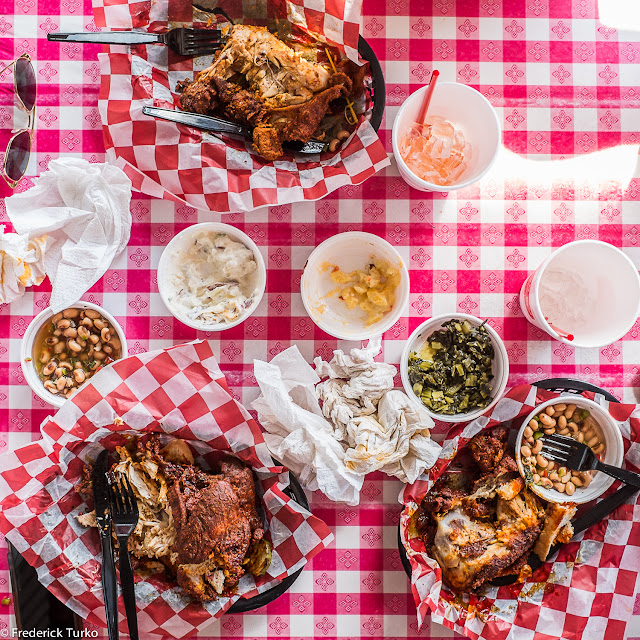 The food we experienced in Nashville – all of it – was solid, satisfying and fresh. We appreciated that we were also able to experience the new school and the old school. None were necessarily bells and whistles places. More, I'd say, salt of the earth, with just the right amount of salt. 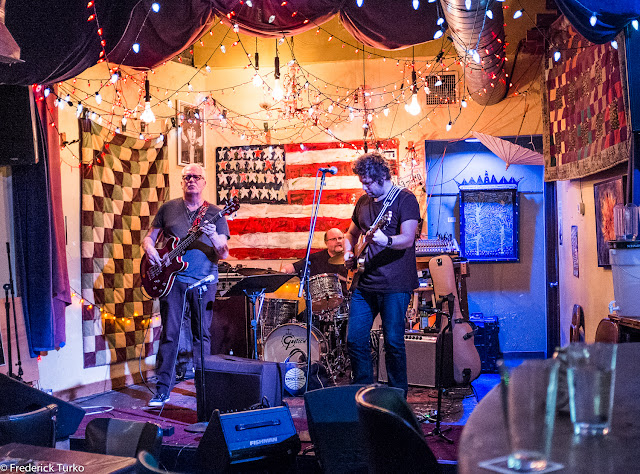 We use this salsa for many things at Fido, but mainly it is the star ingredient in our Huevos Cubano.  Add it to soft scrambled eggs, with some nice sharp cheese and you have a wonderful breakfast item. Place in a blender with some of your favorite hot sauce and you have a tangy green hot sauce. Serve on pork loin, tacos, or just eat with chips!
~ Chef John Stephenson

DIRECTIONS
Preheat oven to 400F.  In a large bowl filled with water, place a few tomatillos at a time in and remove stems and paper husk from tomatillos. Place on large sheet pan. Place the sheet pan with all tomatillos, a little olive oil, and a pinch of salt in the oven and roast for 15-20 minutes until soft. Remove and cool for 10 minutes.

Place the tomatillos in a blender and pulse until chunky. Pour into large mixing bowl.
Put all other ingredients in bowl with tomatillos and mix together until combined. Taste for salt and pepper.

One year ago: This Bud's For You.
Two years ago: Short Rib Stew with Mushroom & Parsley Dumplings
Three years ago: SugarFISH
Four years ago: Scallops with Wild Mushroom Risotto & Rosé Fonduta