What You Really Know About the Dirty South? 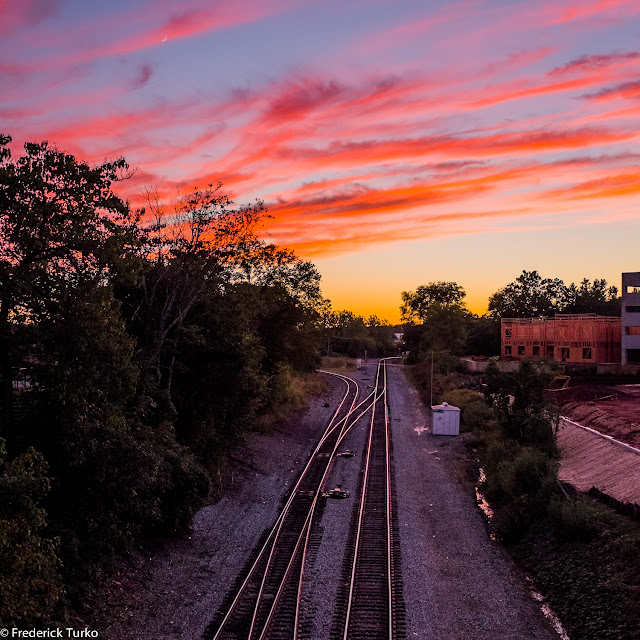 Before moving to the City of Angels, I lived in Atlanta. I moved there straight from college and spent six important years in the Dirty South. For the most part I loved it and those were happy years. My twenties – the salad days, if you will. And, with the exception of one very brief visit to a friend, I had not returned.


One of the beefs I had with the ATL when I was there was the sprawl (and so, of course, I moved to LA). The city seemed disconnected as a whole. I remember the nail in the coffin for me and the ATL - I was walking down the street in my neighborhood, Little 5 Points, when a friend drove by, honked his horn and hollered, “What up, Duchess?!” (Yes, that was my nickname). I don't know what it was about that moment. I suppose I had been itchy already, but right then I felt like I couldn't breathe. Despite the sprawl, despite the city-ness of the city, everything seemed so small. I needed to fly away. I needed to find bigger. And so I did.

It's a funny thing, however. After all of my years in LA, the very thing thing I really missed, the thing I yearned for the most was exactly the thing I had turned away from in Atlanta all those years before. Screw anonymity, screw the whole little fish/big pond thing, I wanted community and family. I wanted little(r), not big(gest). I wanted to return home to Richmond. 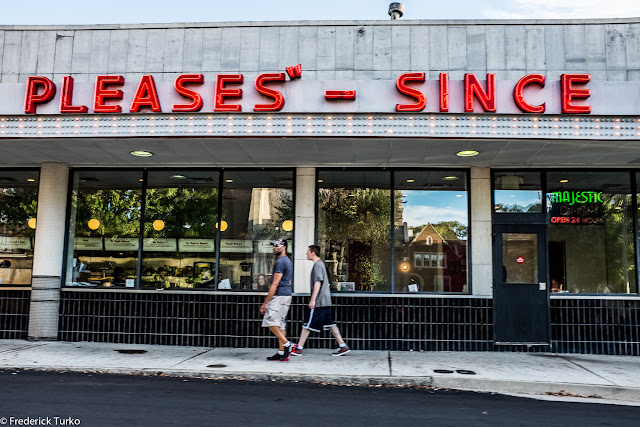 So, how could I not stop in Atlanta, the very city that took me on my long journey back home? (And I do so love to come full circle) Plus, it has become a pretty big food destination over the past few years. What's more, some of my old friends from back in the day are smack in the middle of this Atlanta, New South food surge. And some other old friends are still making their food, their way, deliciously, same as it ever was. And I had three places to visit that fell into either one, the other, or both of these categories.

Our first stop was one of those classics, El Myr. It was my Regal Beagle, so to speak, and perhaps where the whole “duchess” thing originated. Part dive bar, part DJ venue, part diner, part tattoo corral, all cheap beer, tequila, chips, salsa, guacamole and massive burritos. I was relieved to find, upon bellying up to the bar one quiet afternoon for lunch, that not a thing has changed. Every possible surface is covered with outsider art or band stickers, ashtrays on each table, jukebox in the corner, and the same gloriously irreverent and surly staff: perfect. As Fred and I split chips, salsa and guacamole, a couple of sweet teas and a Brunswick stew burrito that was the size of our dog, Eduardo, I gazed around the space, nostalgically. If those walls could talk... Actually, I'm glad they can't. As soon as we finished, I hurried Fred out. Just in case.

The next morning was slotted for brunch at another restaurant that held a special place in my heart, a spot that employed me for my last year in Atlanta: Ria's Bluebird. Ria is a local celebrity of sorts in Atlanta and has been for as long as I can remember. Everyone knows Ria. And, likewise, everyone knows her namesake restaurant famous for its brunch. In fact, Ria recently appeared on the Food Network's show, Chopped. It was a brunch battle. Ria won. Even on a weekday there was a bit of a wait in her tiny little nook on Memorial Drive, but fortunately Fred and I most often prefer to dine at the counter, and, after about ten minutes, we had our seats. And then we dove in: two coffees, huevos (grilled, blue corn tortillas with black and pinto beans, topped with white cheddar, two fried eggs, salsa and sour cream), biscuits and gravy (two handmade buttermilk biscuits with pepper milk gravy), and a short stack of buttermilk pancakes, aka “The world's best pancakes” - New York Times (hand-sifted, made from scratch, with hot maple syrup). Chopped champion? “World's best pancakes”? I get it. This is food for the heart, mind and soul. 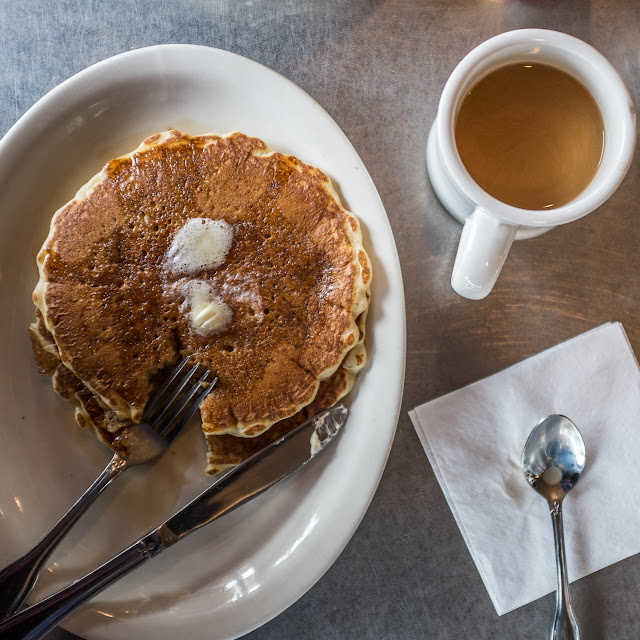 After that meal, we returned to our home base: my dear, dear friend, Brian's house, at which point we all three decided we should take a walk. Brian led us to Atlanta's newest, and probably most attractive addition yet; the BeltLine. The BeltLine is a former railway corridor around the core of Atlanta which is under development in stages as a multi-use trail. Some portions are already complete, while others are still in progress, but absolutely hikeable. We walked from Brian's house, which is a stone's throw from my old apartment, all the way to the dog run in Piedmont Park. Though there and back took the better part of the afternoon, the concept of that route being realistically walkable in that amount of time would have been completely unheard of during my time in Atlanta. To see all of the people walking, riding their bikes or skateboarding, through the heart of a city as car-centric as Los Angeles was remarkable, and truly a beautiful sight. Kudos, ATL.

Alright, we all three had exercised, we got sunshine, some beautiful fall scenes, a lot of laughter and conversation, and now were showered and ready for our fancy dinner at my third, planned destination: Miller Union. As a result of more old friends and Facebook and other social media, I had been hearing about the development of Miller Union long before they opened in late 2009. Plus all those years ago, their chef, Steven Satterfield had worked at quite a few well-known and well-respected restaurants in Atlanta (one with Ria!) and was my roommate's bandmate. So I was very much looking forward to saying hello and finally experiencing this New South food magic he has been creating that has been mentioned in every, single food-related magazine that I have touched in the past few years. But really, one dish in particular, I'd say their most iconic dish: his farm egg baked in celery cream. That's right - a single, beautiful, farm fresh egg with that bright orange yolk suspended in cream, infused with the earthiness of celery, and baked until it's set like custard, and served with a crisp, buttery slab of grilled country bread. This dish exemplifies freshness, simplicity, restraint and beauty. 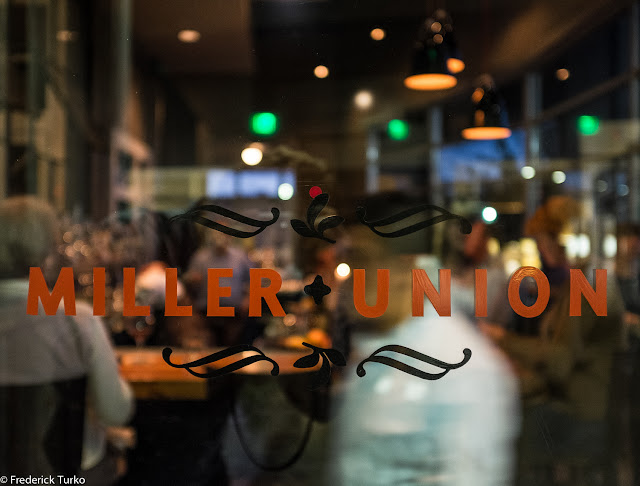 That alone, and of course a little QT and a glass of wine with Steven after dinner was well worth the entire evening. 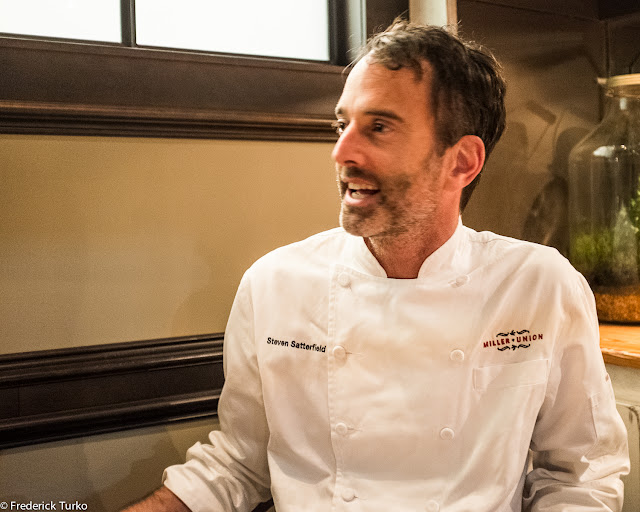 Atlanta, you surprised and delighted me on many levels. You gave me three days with Brian, good wine, delicious food, first glimpses of fall, pride and confidence in growth and change for the better, wonderful and profound memories of a life and a me that I had almost forgotten – and missed. You took sprawl and created cohesion. Atlanta, you are big and beautiful and doing things right. And though I am confidently heading towards my new home, I will keep all of these thoughts tucked not too far away. Because you never know. You never do. 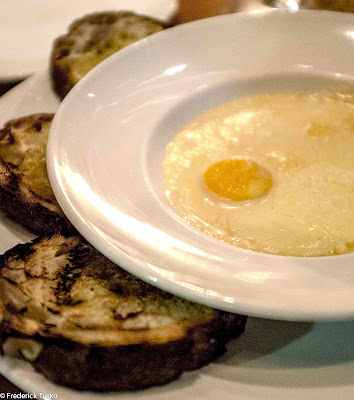 DIRECTIONS
Preheat oven to 350 degrees. In a small saucepan, gently heat cream, celery, shallot, onion, salt, peppercorns, and herbs until very hot. Remove from heat and let steep for 15 minutes. Meanwhile, lightly butter two small ovenproof ramekins and crack an egg into each, being careful not to break the yolk. Strain the cream into a small bowl, gently pressing on the solids. Discard solids. Spoon cream over each egg just until covered. (It's okay if the egg yolk is protruding slightly across the top.)
Bake dishes in preheated oven for 5 to 6 minutes. Check closely to make sure the whites are setting but the yolk is still soft. Then turn the oven to broil and, with the door propped open, heat until tops begin to brown. Remove immediately and let rest a minute before serving. Serve with warm crusty bread brushed with olive oil.