Deep in the heart of Texas. 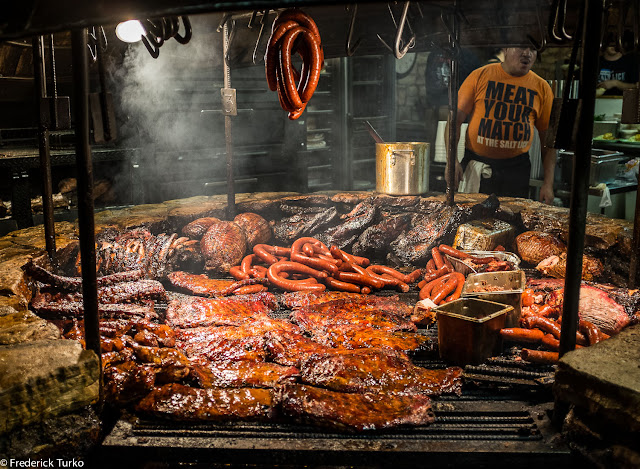 We arrived at our next stop after a long day on the road. We had driven all day and only been in one state – so you know we must have been in Texas. I was extra excited because A) I was meeting an old friend I hadn't seen since college, and B) I had never, ever been to Texas before. One thing for sure; there would be BBQ.


Now, I'm from the East Coast and that's usually the Carolina style BBQ camp. This means the meat (usually pork) is served pulled, shredded, or chopped. The predominant flavor is that vinegar-based sauce - it's tart. And cole slaw is invariably on top of it. Texas BBQ sauce is darker, thicker, tomato-ier, it's sweet. And this Q is slaw-free (or, at least, on the side).

After a fury of back and forth texting from the road with my friend, we agreed to meet at the landmark Texas BBQ joint, The Salt Lick. It worked out beautifully as we rolled into town in the middle of a beautiful sunset. The restaurant wasn't too far from their house – a little ways out of Austin, on the side of a long, lonesome, bucolic road in Driftwood, Texas. They call it Hill Country. 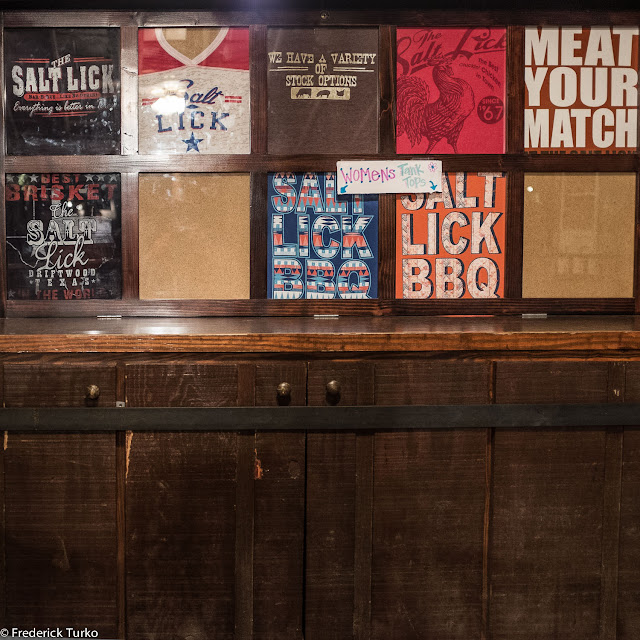 Opened in 1969 by Augustus 'Texas Boy' Roberts, Sr. and his wife, The Salt Lick grew quickly in popularity and went from being open only a few times a year to being open seven days a week. Upon walking into the large, ye olde wagon wheel, lodge-like space, I was greeted immediately by the massive open BBQ pit filled with MEAT.

Between the four of us we ordered everything – brisket, pork ribs, beef ribs, sausage, turkey and a half of a chicken. All of which came with sides of potato salad, cole slaw, beans, bread, pickles and onions. 'Thurman's Plate' was put in front of me (because that's the dish that 'Poppa always ate'); brisket, pork ribs and sausage. We did get some sweet tea, but as for the adult beverages, BYO. Thankfully our friends brought a mobile cooler filled with local beers and a box of wine (!). 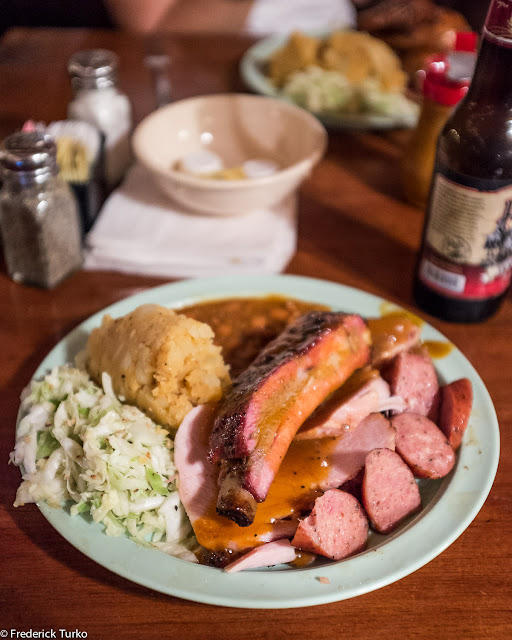 About mid-way and 32596 bites of that sweet, Texas barbeque'd meat through the meal my friend asked me, “So, do you think it's GOOOD or do you think it's good?” Fred and I looked at one another and then back to her and replied in unison, “I think it's good.” And that kind of says it all. It's a really wonderful experience. The space is fun and authentic. The BBQ pit is fantastic. The food comes out at a clip, is inexpensive (the entire meal for four was around $60) and there is a ton of it. The service is friendly and approachable. We had a box of wine. Maybe it's those Carolina BBQ roots, and though I thoroughly enjoyed my foray into Texas BBQ, it was good. Really good. And really fun.

Missing were the wheelbarrows to transport us back to our cars.

And after that day of driving and that meal, we slept a sound sleep deep in the heart of Texas.

Well, since it took two days to drive through Texas, you get to hear about two restaurants.... 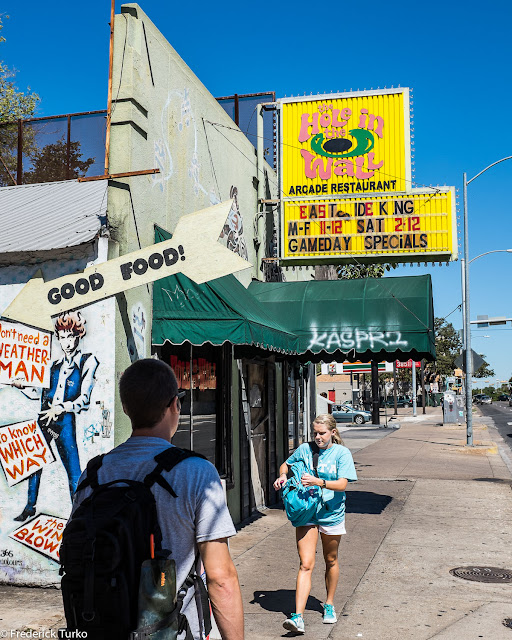 The next day's lunch was all mapped out. And it was all Fred. He has been an avid fan of Top Chef, along with me, for many seasons, and had been reading all about the former Cheftestant, Paul Qui, and his flourishing career in Austin. More interestingly to Fred, Qui's brick and mortar iteration of his East Side King food trucks.

We found it hiding in the back of a divy dive bar aptly called Hole In The Wall, across the street from UT. The ultimate college bar; dark, dingy, old school rock music blaring from the speakers, with pool tables, pinball machines, murals on the walls and band stickers on everything else. Qui uses this iconic space to flex his tasty, funky fusion street food riffs on Japanese, Thai and Filipino cuisines. Using the ubiquitous cilantro, mint, onion, jalapeño combination in many of the dishes, Qui throws a little shout out to Texas to boot. Boot. Texas. Get it? Hello? 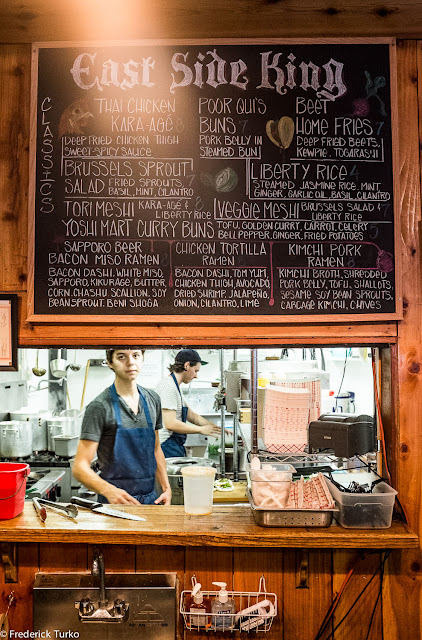 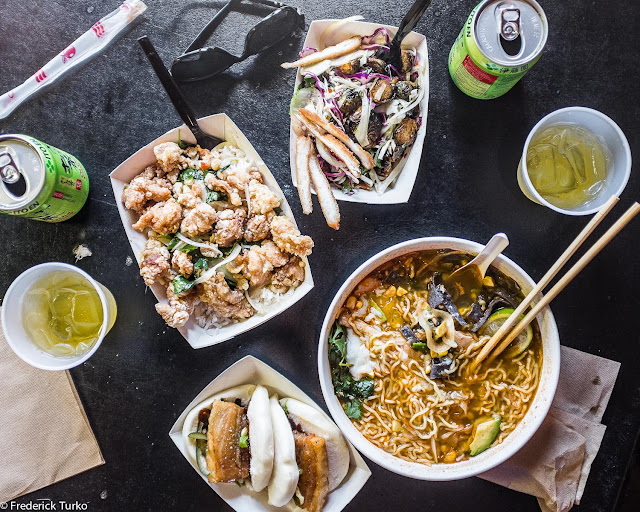 The food was audaciously impressive. The dishes were heartfelt, inspired and esoteric. Everything was bright and fresh and colorful. The Liberty Rice; simply steamed jasmine rice, ginger, garlic oil, basil, cilantro, mint, onion and jalapeño – yet, so bold and herbaceous. The ramen was the perfect Winter comfort soup - so complex, layered and delicious, we couldn't stop eating it in even the arid ninety degree heat. All of this beauty confidently served up in little paper dishes with little plastic utensils. And putting a mere $40 dent in the wallet.

We ate a lot of food – and fairly big food - but did not feel weighed down at all. I'd even say we left with a spring in our step and a long forgotten Clash song in our heads. 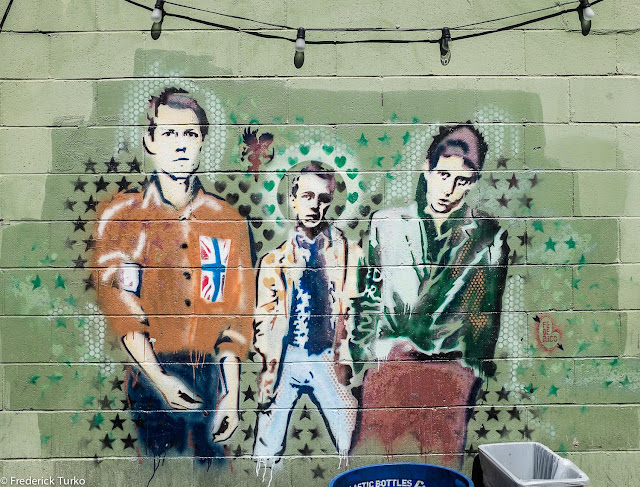 DIRECTIONS
Make the Brine
Place water, sugar, fish sauce and vinegar in bowl. Whisk until sugar is completely dissolved. Add garlic and thai chilies and whisk until both are well dispersed throughout the liquid.

Brine the Chicken
Take the chicken thighs and cut into 3/4-inch cubes, making sure to remove fat and tendons from the thighs. Place in bowl. Whisk previously prepared brine to redistribute garlic and chilies evenly. Ladle 1.5oz of brine into the bowl with the chicken and toss. Cover bowl with plastic wrap and let marinate for 8 hours before use.

Prepare the Sauce
Place water, sugar, fish sauce and vinegar in bowl. Whisk until sugar is completely dissolved. Add garlic and thai chilies to the mixture and whisk until both are well dispersed. Add mae ploy and whisk until combined with mixture.

Make the Liberty Rice
Wash rice in bowl until water runs relatively clear. Place rice in cooker and add 1 quart water. You want a 1:1 ratio of rice to water. Add ginger. Close lid and set the rice cooker to cook. Once the rice is done mix in garlic oil. Keep warm until ready to serve.

Meanwhile, Slice Jalapeños & Onions
Cut the ends and tips off of 10 large jalapeños. Using a mandolin slice the jalapeños into 1/8-inch slices. Cut the tops off of 2 large yellow onions. Peel onion halves making sure that the root of the onions remain. Slice the halved pieces of onion in half, so that the onions are now quartered. Using a mandolin slice the onion width wise into 1/8-inch slices. Place sliced jalapeños and onions in the fridge and hold until time to serve.

Prepare the Herb Mixture
Pick herbs, making sure that only the nicest green pieces are saved. Places herb mixture in bowl and toss herbs gently making sure that herbs are well mixed in the bowl. Place herbs in fridge and hold until time to serve.
Cooking and Serving

Place 1.5 pounds of brined chicken in a bowl. Pour cornstarch into the bowl and toss chicken, until well coated. Place coated chicken into sieve. Place sieve into empty metal bowl and shake chicken in the sieve until excess cornstarch falls into bowl underneath. Place chicken into fryer basket and drop into oil. Fryer should be at 375 degrees F. Cook chicken until crispy and golden brown. While chicken is cooking make sure to shake the basket so that the pieces are able to evenly cooked. Separate pieces using tongs if needed.

While the chicken is cooking take medium metal bowl and place small handful of onions and jalapeños in bowl. Set bowl aside until chicken is finished cooking.

When chicken is finished pull from oil and allowing excess oil to drain and the chicken to rest. Place chicken in the medium metal bowl that contains all the vegetables. Season chicken with 1/2 tablespoon of salt. Pour 1/4 cup chicken sauce over chicken. Toss chicken and vegetables in the sauce until all is evenly coated. The chicken and vegetables should have a nice glean to them but chicken should still be very crisp.

Place 3/4 cup cooking rice into individual bowls. Place chicken and vegetables on top of rice. Top with small handful herb mixture and your dish is ready to serve.

Serve the chicken piping hot with sliced onions and jalapeños. Top with mint, basil and cilantro.