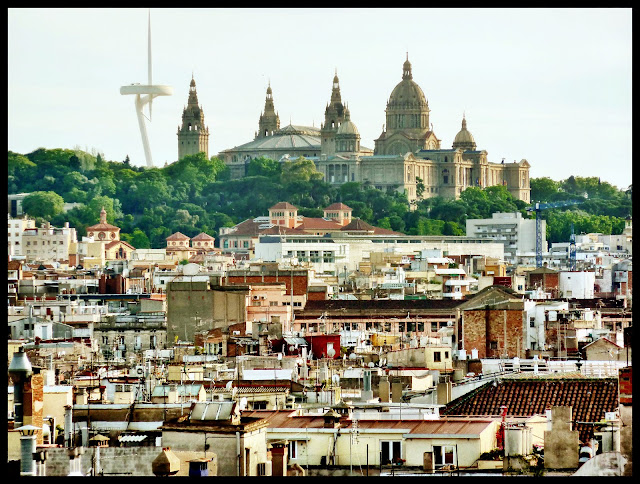 That was a lot of ham yesterday. There was a lot of everything yesterday. We were not deterred, however. Actually, I think we were. We were supposed to meet up with Sal and the gang for lunch, but we didn’t get up and moving until pretty close to lunch time anyway, and we desperately needed to be free of time constraints and meeting up with people for just one meal. And both Chris and I really had our hearts set on one meal in particular.


Three years ago, on that original vacation with Chris, he took me to La Boqueria. La Boqueria is a huge, covered, market and an impressive landmark with an entrance from La Rambla. The smells, colors, sounds and activity easily throw one’s senses into overdrive, not to mention the wild and crazy items sold in the market. It is truly a small village inside of a big city. 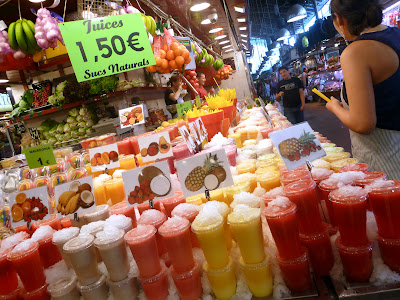 La Boqueria also offers up a few counters serving food. One in particular, my favorite and the focus of this post, is El Quim. Prior to that first visit Chris had excitedly described their, perhaps most lauded dish, baby squid and fried eggs. That day he ordered that and I ordered the sardinas a la plancha. That meal has stayed in my memory since. Such fresh ingredients, such delicately nuanced flavors and textures. A couple of glasses of cava. Delicious perfection. 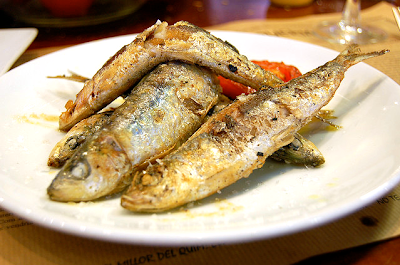 And this brings us to about Noon on that Thursday, with Emma and Chris. Yes, we may have, in our er, exaltation the night before, told our new posse of friends that we would meet them the next day for lunch. But in the light of day, come Hell or high water (or being lame to our new friends), we knew we were headed straight for El Quim.

And there, in the middle of the bustling Boqueria stood the stall we sought. All eighteen of its stools occupied and a crowd of people waiting two-deep to scurry into any newly freed spots. Somehow, silently, we had a plan: Emma stalked one side of the stall and Chris the other. I was the liaison between the two to be able facilitate getting all three of us to the opening of seat(s) as quickly as possible. This all took great concentration. 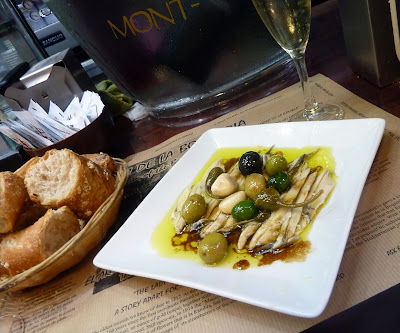 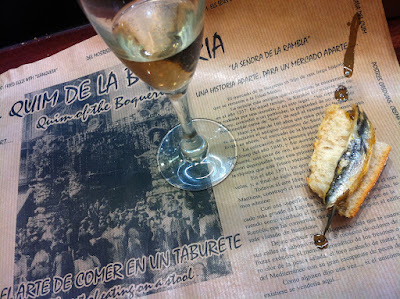 I was over the moon. I was literally clapping when the first bite was in my mouth. The anchovies were fresh, meaty, firm and elegant in their simple marinade. With a few bites of that dish and a few bites of the bread swabbed around in the oily goodness I took my newly vacated stool and stole a moment to soak up my surroundings.

El Quim is cluttered and chaotic. The counter crowds with dishes – frittatas, paellas, and fresh seafood.  Sausages, dried chiles, produce, garlic and pots and pans hang from the eves. Orbited by a swirling mass of entropy, the tiny kitchen gets along amazingly well. The menu is chalked up above the stove, although paper menus are available as well. You’ll find yourself seated next to travelers from all over the world, locals, foodies and chefs alike. Quim is always behind the counter and is also always surprisingly friendly in the midst of the frenzy. He also manages to squeeze his three or four chefs/co-workers back in that little nook of a kitchen as well. Size-wise, think food truck. Cut in half. I don’t know how they do it. 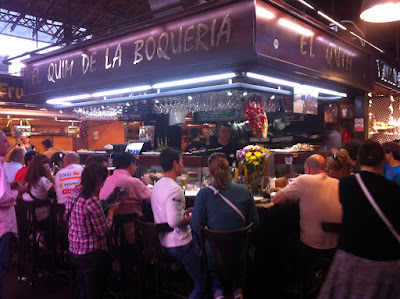 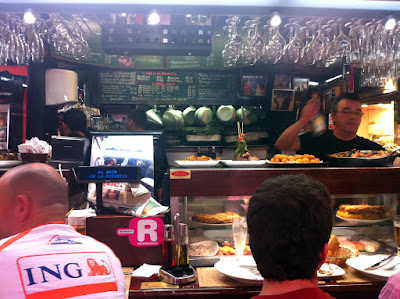 Second glass of cava and time to order the big stuff. First off, El Quim is most famous for his fried eggs. Period. He puts them either over or under pretty much everything on the menu. As mentioned above, Chris orders one thing and one thing only: the fried eggs smothered under a mosaic of tender, baby squid sautéed in a pan sauce of oil and a touch of chile heat. This dish is also Quim’s calling card. It is ubiquitous with the restaurant’s name. When the eggs are cut up and the yolk runs into the squid the dish becomes complete, thickening and marrying all textures and flavors that hop, skip and jump across one’s tongue. 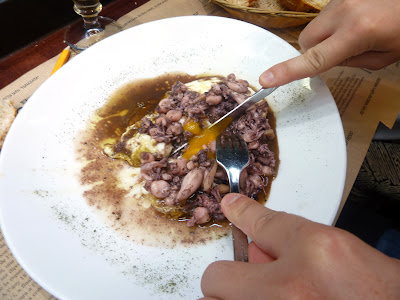 Emma, in the spirit of not having tangential dishes at the “table”, opted for the fried eggs with jamon iberico (Iberian ham). This ham is from free-range pigs that roam oak forests and eat only acorns. This ham is also called Jamón Iberico de Montanera. The ham is cured 36 months. Bellota jamones are prized both for their smooth texture and rich savory taste. You really just can’t go wrong with this dish. 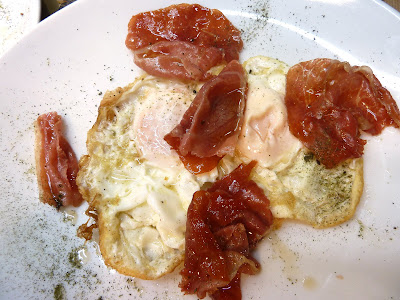 I went in an odd direction. I ordered the Catalan sausage over white beans with aioli. This was a simple and savory answer to my fairly prominent hangover. The presentation left room for some humor for obvious reasons, but don’t be fooled – it was rich and robust with clean succinct flavors. The slightly crisped skin of the sausage gave way to a tender, succulent, meaty inside. The beans underneath provided the perfect texture to round out the variations in the sausage. 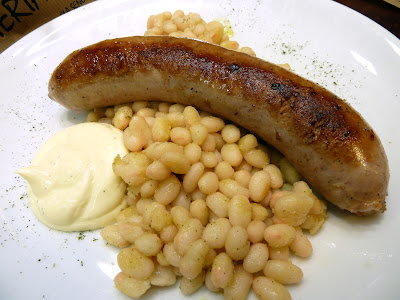 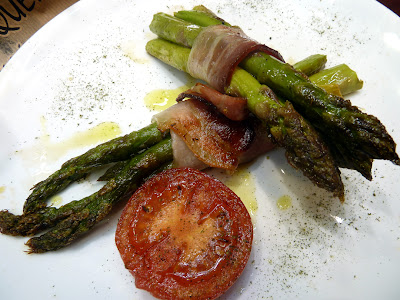 As we were saddling up to head out to our second lunch to meet Chris’ friends Quim gave us a little dessert on the house. I was a little scared of it as it looked as though it fell into the gelatinous-gooey-fruit department. Emma assured me it would be alright for me as it fell into the coconut department. That is usually okay. I still don’t know what it was but I ate it. 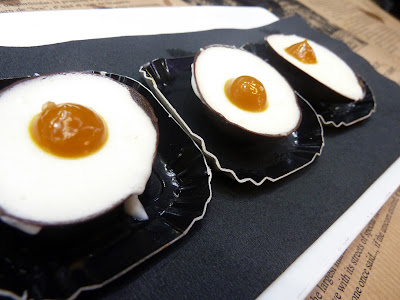 It’s understandable why chefs flock to eat here. The quality of the ingredients is unparalleled – everything is fresh from the market. Quim’s execution is simple and solid. And the flavors are confident and honest and all cooked to order. Straightforward and comforting, this is the type of food that you love to eat and want to crave.

And this was just our first meal of the day.

We then went on to meet up with the boys at a restaurant called Joséphine, but we were so late that they were basically out of everything. So we migrated to a rooftop restaurant and bar called La Isabela. There we camped out for hours, drinking and eating more ham. The photograph at the top of this post was taken at this spot. It had a terrific view. 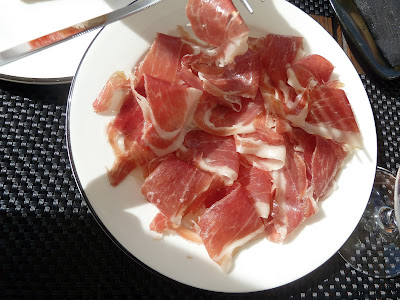 We then moved on to the home of Paul, where we had some more wine and snacks and lost Emma and Engel for a little too long for my comfort. But they appeared eventually. Wearing pirate hats and swords. And carrying the largest lollipop anyone has ever seen. Then we ended up, briefly, at a small café. I mostly threw a tennis ball for Paul’s dogs during this stretch.


And then Engel, Chris, Emma and I ended up at a restaurant, apparently heralded for their – wait for it – ham, Recasens. I wish I could share more about this part of the evening but we were not only dead on our feet tired. But we were drunk on ham and libations. Poor Chris was the worst off. His eyes were closing while we were standing outside waiting for our table and the only thing he could put together to utter was, “No more ham. Please?”

We waited about thirty minutes outside for a table to open up. It was about 1:00am. They did bring us a small wicker basket of ham to keep us at bay while we waited. We finally got our table. The place was tiny and adorable. Turns out they specialize in ham! So we had three or four plates of different kinds of hams and some cheese.

Our trifecta somehow made it back to our apartment building. Wearing the pirate hats. When we arrived at the door of the building we ran into two Canadian women who were staying across the hall from us. We started chatting. Well, Emma and I started chatting. Chris made a bee-line into the building and up to our apartment to face plant on his bed. Emma and I ended up hanging out with the Canadians, drinking wine and laughing until almost dawn. But not before Emma broke a glass filled with red wine in their apartment and said something mildly offensive about Canadians.

I do believe this was the first night of the trip that Emma, Chris and I did NOT cap off the evening with a bottle or two more bottles of wine while lounging in our apartment, sighing, giggling, and taking stock of the last days (who's even counting, now?) week plus, the whirlwind, of our adventure. At least, if we did, I don’t remember it.