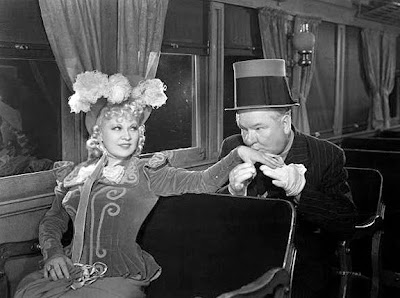 The mother of a friend of mine from my high school days referred to any inclement weather as weatherin’. So, for example, if it was raining or snowing out, it was weatherin’ outside. I am aware that this is strange as there is always a state of atmosphere, always weather at a place, whether it regards heat, cloudiness, dryness, sunshine, wind or rain. But you have to admit: it’s weatherin out really gets the point across.

Well, it has been weatherin’ more than usual here in the city of sunshine. In fact, it’s been weatherin’ so much I – not wanting to be out in the cold, wetness – whipped through my Netflix and had to hit the video store. Remember those? It had been so long since I had been in that they had to renew both my address and credit card information.

I rented four DVDs, more than usual, and the max one can rent at a time at my store. I then stopped to pick up some dinner to go from Greenblatt’s, a sufficient amount of wine (ahem) and headed back up the hill to put on my sweatpants and max out on the couch with mountains of movies. It seems like it has been a while since I’ve had an evening like that, being such a busy body. I often have to force myself to stop tinkering about and just veg out.

So, after finishing 500 Days of Summer and halfway through The Ugly Truth (Lay off! Everyone has guilty pleasures! Plus, have you seen Gerard Butler??) I got a hankering for some popcorn or some such thing.

I had no popcorn.

As you now know, I do so love a crunchy, salty snack. I also love to improvise and concoct with items in my refrigerator rather than going to the store with designed menus in mind. Time for some kitchen composition.

Although one might consider this a deviation from my chillaxed evening on the couch, with no tinkering allowed, it was so fast and easy that it hardly counts. Popcorn would have taken just as long.

And it was even better.

With this combination of elements, it can just keep on weatherin’ out there a little longer. Perhaps next time I will actually watch a W.C. Fields movie. Um, probably not. 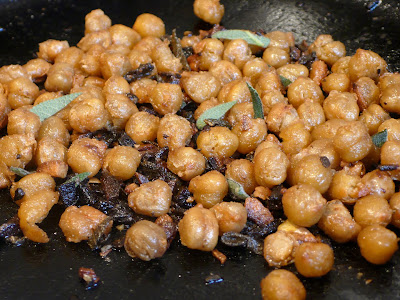 DIRECTIONS
Preheat the oven to 425.

In a cast iron skillet, heat the oil. Add the chickpeas, garlic and a pinch of salt, and sauté for about 5 minutes. Be sure the beans are well coated with the oil, then add the sage, and remove the pan from the stove.

Place the skillet in the oven and roast, giving it a shake every so often. Roast until the chickpeas begin to turn brown, about 15-20 minutes. Remove the pan from the oven and set aside to cool a bit.

When the chickpeas are still hot, sprinkle with a little additional olive oil, a little extra pinch of salt and a squeeze of lemon.