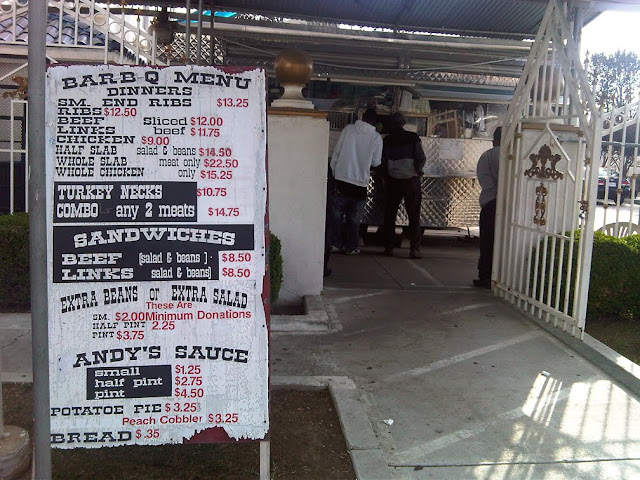 Recently I stumbled across this post on one of my favorite food blogs that had me extremely curious and suddenly seriously hankering for some barbecue. So, last Saturday, I called up Ryan (I knew he’s be all over this one) and, with mimosas to go (l love that guy), we headed to Compton for some BBQ turkey necks. On the way there we kept undershooting it and pulled over to ask a local for directions. He knew exactly what we were talking about and excitedly pointed us in the right direction. That’s always encouraging.

Folks, this is no ordinary food truck (are any these days?). This truck was the brain flower of Pastor Corverster Williams Sr. of the Prayer Assembly Church of God in Christ. This truck, with its fountain of turkey necks, was established to help Pastor Williams raise enough funds to build a new church for his congregation. And by golly, in 1992, after only 2 years of slinging bbq turkey necks, he did.
So to this day the shiny, silver truck sits in the shadow of the shiny, three-story Prayer Assembly Church of God. The truck is manned by Associate Pastor Virgil Wilson, and Big Jack is on the smokers. They are only open on Fridays and Saturdays from 9am – 9pm.
Ryan and I ordered WAYTOOMUCHFOOD. Oh, so much food. By the time I got up to the window he had already hastily ordered his turkey neck extravaganza without perusing size and combo options. And we didn’t get to collaborate on ordering smartly to get the best cross section of the menu. Oh well. So he got the turkey neck dinner with mac & cheese. This came with potato salad, baked beans and a coupla slices of white bread. I ordered the beef ribs with collard greens. My food also came with potato salad and baked beans, but I also got a cornbread muffin and a couple slices of wheat bread. Why did I get wheat? I haven’t the faintest idea. 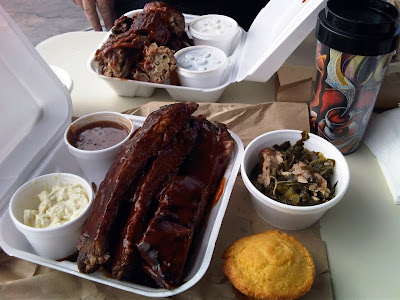 The whole enchilada, as it were.
There was one, little table by the spits in the parking lot, and we parked our operation, with our mimosas, there. Our portions of food probably weighed 2 pounds each and when we opened them up we each gasped – me in fear, and Ryan in delight – at the sheer mass of food before us.
I have to say, everything was perfect and delicious! I was scared of the turkey necks (which is one of the reasons I asked Ryan to come with. He’ll try anything) but they were wonderful. There was so much more meat on them than I would have thought, rendering them far from scary. The mesquite co-mingled delightfully with the turkey meat. The ribs were big and bold with the meat literally falling off the bone. The bbq sauce, which was used on both of our meats, was perfect – thick, smoky, tangy and a little bit sweet. The beans, collards and potato salad were all delicious as well. The mac & cheese was a little dry and not too flavorful, and the cornbread only got a tiny drop of attention, as it was also a bit dry (but, admittedly, I am not a huge cornbread fan). But seriously folks, this food was a godsend, and this is truly some of the best barbecue I have had this side of the Mississippi. 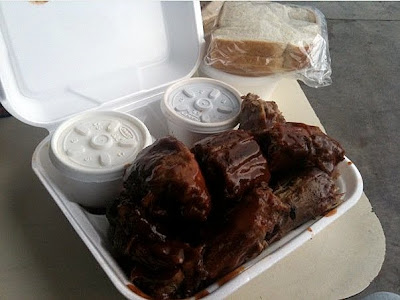 Ryan's turkey necks and Ryan's photo.
After we finished eating (I did not even make a DENT in my platter, no joke.) we poked our heads in the church. I would have liked to explore the church that BBQ built more, but there was a wedding rehearsal going on. Then we decided to explore the area and walk off the impending food coma at the Magic Johnson Park – which is quite lovely and has lots of ducks. 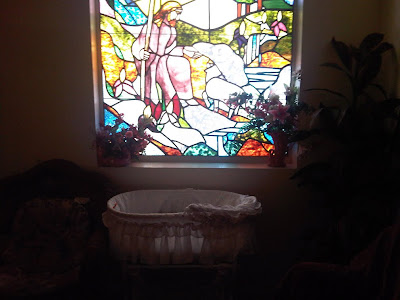 The women's bathroom lobby.
Before pulling out of our parking spot Ryan was already plotting to return on an upcoming Friday for a lunch break from work. I also plan a repeat, with more friends in tow, very soon. Our drive home was filled with comfortable silence in reverie, and as I dropped Ryan back off at home, with the 858302 pounds of leftovers and headed to a champagne tasting at Greenblatt’s, I thought to myself, what a wonderful world.
Amen.
Prayer Assembly Church of God in Christ AKA the BBQ Church
442 E. El Segundo Blvd
Los Angeles, CA 90061
Tel: 310.523.2481