Hanover tomatoes mean RVA is in the hizouse!

I'm back in the old stomping ground, y'all. And as such, am inspired to wax on a bit about some local culinary gems. One in particular, the Hanover tomato. Did you know this tomato has it's own festival? 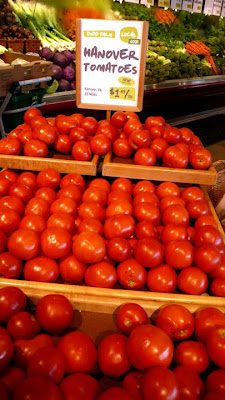 Slightly north of Richmond is Hanover County, which, up until a few years ago, was primarily a rural expanse populated by family farms. A drive past former farms now sprouting subdivisions and shopping complexes reveals the same loss of farmland to development that is plaguing many areas surrounding growing cities. The few agricultural holdouts against this trend continue to turn out plentiful harvests of wheat, corn, soybeans—and juicy, succulent Hanover tomatoes. Virginia is the third-largest producer of fresh market tomatoes in the country, and Hanover County yields the second-largest harvest of tomatoes in the state.

One of the largest producers of Hanover tomatoes, and also one of the few family farms remaining in the area, is Kirby Farms near Mechanicsville, where Tommy Kirby has lived and worked all his life. Now his son Kevin has joined him in growing these highly prized plump tomatoes, known for their vibrant color and full flavor.

Kevin Kirby attributes the tomato’s characteristics to the “sandy, loamy soil” that is prevalent in Hanover County. Another prominent area tomato farmer, Robert Dodd of Dodd’s Farms Acres, concurs. He claims that “you could grow the same tomato plant 30 miles away,” and it might taste different because the soil in Hanover County is “the best there is.” Kirby adds that while many tomato varieties are brought to market too early, Hanover tomatoes are “vine ripe,” meaning they are never picked until fully ripened. The naming of Hanover tomatoes goes back to “old-fashioned word of mouth,” according to Kirby. It probably harkens back to bygone days when Hanover farmers would bring their harvest to Richmond markets. Today, the tomatoes can be found at most central Virginia supermarkets, farm stands and country stores throughout the summer, and they are usually labeled as such. However, unlike Vidalia onions, which by law can only be so named if they are grown in seven specific Georgia counties, Hanover tomatoes have never received official designation.

I still maintain that the best way to enjoy a choice tomato is simply; sliced with salt, pepper (and a dollop of mayo?), or in a sandwich. But if you’re in the mood for a more adventurous treatment, here is an appetizing summer soup from Richmond-area chef Martin E. Gravely.

Roasting the tomatoes before adding them to the soup intensifies their flavor.

DIRECTIONS
Preheat the oven to 500 degrees. Place the tomatoes, cut-side up, on a sheet pan and roast until blackened around the edges—about 30 minutes.

Meanwhile, over medium heat, cook the pancetta and onion together in a heavy-bottomed saucepan until the onions turn deep golden brown. Add the garlic and crushed red pepper, cooking an additional minute. Add the wine and bring it to a boil, scraping the bottom of the pot to release any accumulated browned bits. Add the stock and blackened tomatoes and simmer for 30 minutes to an hour. Using a food processor or a blender, purée the soup in batches, and strain it into another saucepan. Season fairly generously with salt and pepper.

In a separate bowl, whisk together ½ cup of cold water and the cornstarch until well dissolved, then whisk in one cup of the hot soup. Add the mixture back to the soup and bring to a boil for 10 seconds to thicken, stirring well. Turn to low heat and gently stir in the crab along with the lime juice.

Serve immediately, or chill the soup and serve it cold.