The Legend of Jammin' Raku 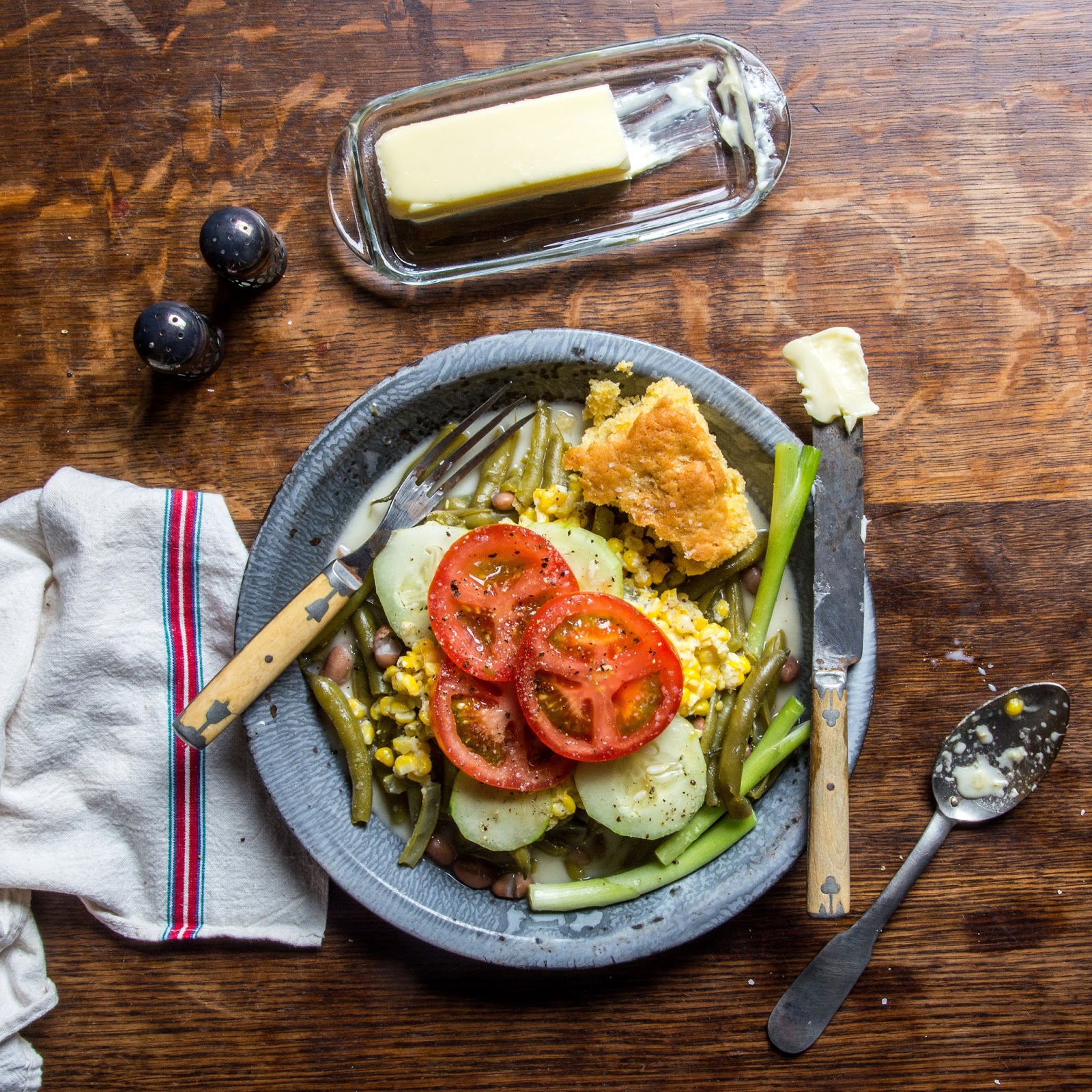 I have wanted to publicly share the story of Jammin' Raku going on a solid fifteen years - waiting semi-patiently for just the right time and place. And I've found it with my first Fathers' Day back home with my dad. So he can berate me in person once he reads it.

This story began back in the mid-nineties - an era where I primarily listened to and consumed all things hip hop. I was living in Atlanta at the time, and vividly remember the phone call from Dad asking, rather excitedly, if I had heard “the new, hip rapper, Jammin' Raku.”

As my eyes rolled out of my head and down the block, I replied that I had not.

“Well, you would love him,” he told me. I was dubious to say the least. I thought I was extremely cool – cutting edge, even, with my musical tastes. Considering I was listening to Organized Konfusion and my dad, Alison Krauss, well, that kind of nailed it for me. Let's just say I didn't exactly follow up on the Jammin' Raku tip.

Some time passed, a few months or so, and Dad came to visit in Atlanta. “So did you ever find that Jammin' Raku I was telling you about? No? Well, I'm really surprised. He's really hip right now and I know you'd love him.” During his visit he would ask my various friends if they had heard of the hip, new rapper, Jammin' Raku to no avail. Then, much to my horror, he wanted to go to the local record store to get to the bottom of the mystery. I'm sure you've read or seen High Fidelity? Criminal Records was like that. I never went in not knowing what I was looking for and I certainly never went in if I was going to buy anything less than cooler than cool.

I hustled Dad straight to the hip hop section to look under the Js. Nothing. Then the Rs nothing. Then that sinking feeling when I heard him say, “Well, let's just ask someone who works here.” After my dad, quite audibly (and, in my opinion, shamelessly) asked a staff member behind the counter (the back of the counter was elevated about two or three feet so that the staff literally looked down at you) about the new, hip rapper, Jammin' Raku. With no results, we moved on. But not before I bought an actual new, 'hip' album that I thought would redeem me from that excruciatingly uncool moment.

I thought the matter was dropped.

About a year later, I was visiting Richmond and having lunch with my dad when I heard those words again: “So did you ever find anything out about that rapper, Jammin' Raku?” If only the three little letters existed together then – OMG.

“No, Dad,” I said, and tried desperately to change the subject. “Well, let's just drop into the record store here and try one last time. I swear you'll thank me. This guy is right up your alley.” So, of course the record store he was referring to was essentially right up there with the one in Atlanta on the High Fidelity cooler-than-thou scale. Christ, I had spent my entire youth trying to establish my coolness with the staff there, going as far as wearing my Gwar-blood-covered white v-neck tee shirts whilst perusing Fishbone vinyl throughout high school. I still had a crush on a boy that worked there!

Do I even need to tell you that it was the exact same story as in Atlanta the year before? I was even more mortified that even IF there was a new, hip rapper, Jammin' Raku, he couldn't possibly still be new or hip an entire year later.

Once again, I thought the matter was dropped.

Back in Atlanta, another six months or so passed when I received a care package from Dad. With a CD in it. There was also a note: “This is the guy I've been trying to tell you about!”

I looked down at the stark white CD with a silhouette of a cartoonish figure of a man in the familiar large, fuzzy hat with horns. No, not new, not hip (sorry Dad), and certainly not a rapper. Jammin' Raku?

That's my dad. And that's the story of Jammin' Raku.

And today is Father's Day. The first Father's Day I have been able to actually spend with my dad since before the Legend of Jammin' Raku. So we are going to do lots of stuff together. With Fred, too. One of the events is, of course, cooking.

For a long time now I have been hearing about my dad's favorite meal that his mother, Janie, used to prepare. She made it for the whole family often, but when Dad first came back come from the Navy to visit and she served it, he told her it was his favorite of all meals. She then made it for him every single time he came home.

It's pretty weird sounding and has a host of seemingly disparate layers together on a plate: green beans (snap beans) with pinto beans cooked forever with ham hocks, fresh creamed sweet corn, cucumber and green onion salad in iced vinegar, thick slices of ripe tomatoes and cornbread. Oddly, I have never been served this meal. I sort of thought it was a myth, actually. It's very southern and very summer.

Over lunch with my dad and his brother, my Uncle Pat, recently, the two of them chatted about this meal. Pat remembers it well. He ate his with all of the components on the plate together but separated. My dad liked to pile everything on top of everything, in his own special order, in the form of a gloppy strata. This meal was always served with the sweetest of iced tea.

So, tonight, on this momentous Father's Day reunited with my dad, back in the south and knocking on summer's door, we will have his Favorite Meal. I will get to hear wonderful stories of his childhood, family and Janie while we chop and stir and eat.

And maybe we will listen to some of that new, hip rapper, Jammin' Raku's music, too.

I love you so much Dad. You have always been and still are my hero. I couldn't be happier to be spending this day with you again. Happy Father's Day. 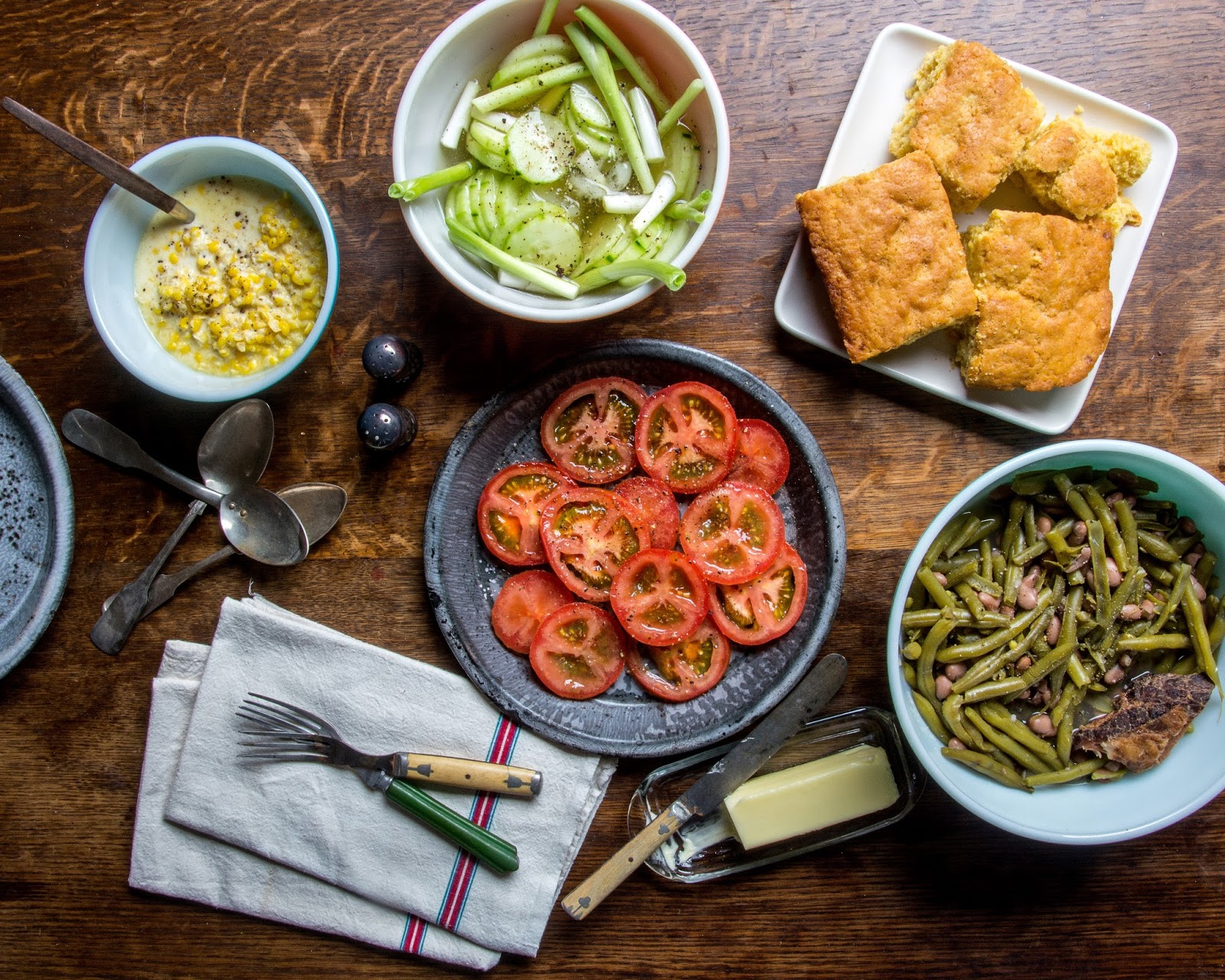 This meal was probably so frequently seen on the dinner table in the summer months because Janie, and I imagine many southern cooks, could harvest nearly all of the ingredients in her backyard garden. The entire meal is compiled essentially of five side dishes. Serve them family style and plate them separately or, like my dad, all piled on top of one another (from bottom: green beans, creamed corn, cucumber salad, tomatoes and then cornbread).

Let me add that all dishes are heavily salted and peppered.

DIRECTIONS
Put water in a 2-quart saucepan; add pintos and diced salt pork. Cover and cook for 5 minutes. Add green beans, salt, and pepper; cover and cook green beans over medium heat for about 45 minutes, or until green beans are tender.

DIRECTIONS
In a large saucepan, melt butter on medium heat.

Add milk and bring to a low simmer, reduce heat and cover. Cook for 30 minutes until the corn is tender.

DIRECTIONS
Toss cucumber, onion, vinegar and ice cubes in a bowl and let sit until well chilled. Salt and pepper to taste.

Arrange on plate and salt & pepper to taste.

DIRECTIONS
Preheat oven to 450 degrees. Add the fat to a well seasoned 10-inch cast iron skillet and place the skillet into the oven to melt the fat and heat the skillet. In a bowl, whisk together the cornmeal, flour, baking soda, baking powder and salt. Remove the skillet from the oven and swirl the hot fat around to coat the skillet.

Pour the fat from the skillet into the cornmeal mixture; stir. Stir in half of the buttermilk and add the egg; add more buttermilk as needed to make a thick but pourable batter. Depending on the grind of your cornmeal and the type of buttermilk you use, you may not need it all. Fold ingredients and don't beat the batter. Pour the cornmeal mixture into the hot skillet. Place directly into the oven and bake at 450 degrees for about 20 to 25 minutes. Remove the skillet from the oven, let rest for 5 minutes, then very carefully turn the cornbread out onto a plate or platter to preserve the crust.