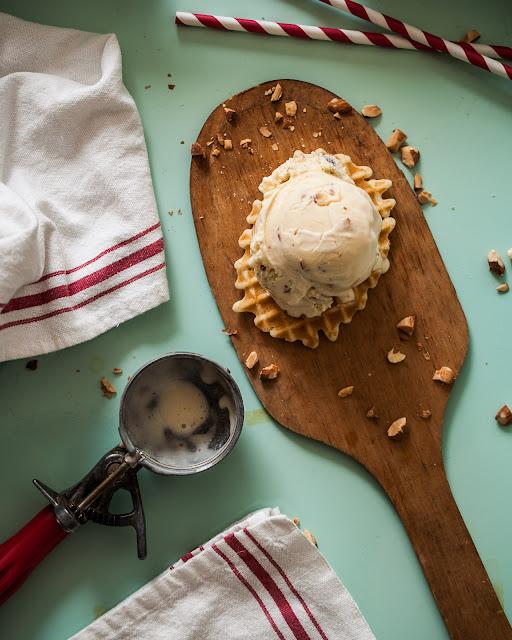 Even though we have a very, very long history of written correspondence via the good old post office, for the past few years Paz and I have been taking turns sending each other 'care packages'. They are kind of, but not necessarily, for birthdays, Christmas, and the like. The ones from me show up on time – unless I accidentally send one to her childhood address where a bunch of frat boys now live, or I mess up the postage, for no good reason at all. The ones from Paz, well, they show up when they show up. I received my last birthday package on the first day of Fall. My birthday is in mid-June. And so, fittingly, she gave me my Christmas package while I was visiting home last month. In April.


From my end the packages are not what most people would describe as important or precious. Often I go through my house and find an odd mish-mash of tchotchkes, randoms and play pretties. Anything from old pictures, to stickers, to a Ryan Gosling coloring book, to old CDs, to clothes that no longer fit, to Chanel nail polish. The very Chanel nail polish she was oohing and ahhing over in some fashion magazine the last time she visited me in LA. To her credit, her packages do seem a little more thought out than mine. It certainly doesn't seem that she is ambling through her house grabbing this and that off of the shelves.

My recent April Christmas package was really kicky, actually. She had been back to visit her 'people' in the Dominican Republic very recently, and snagged some pretty great stuff for me during her stay. There were two types of rum (rhum?), white and black. I don't drink rum (rhum?), but fortuitously my dad does. So I left that behind for him. There was nail polish (not Chanel), a cowbell (no clue), a Guy Fieri spatula that reads, “Cookin' It, Livin' It, Lovin' It”, and a huge wad of straight-from-the-DR, dulce de leche. Paz knows me well. She knows I don't have a sweet tooth, per se, but I love the more savory, more muted versions of sweets: dulce de leche being a prime ejemplo. 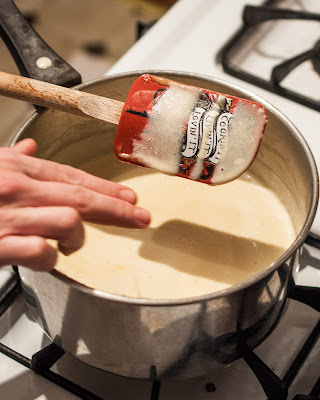 And so from the Dominican Republic, to Richmond, Virginia, to Los Angeles, California, traveled this dulce de leche. And the Guy Fieri spatula. Of course. Funny thing about the Guy Fieri spatula; I know she gave it to me as a gag (we shared massive giggles over the, now-infamous, Pete Welle's scathing review of Guy's American Kitchen & Bar this past November). But, I have to admit, it is actually a really good spatula. Who knew Guy Fieri would ever be so prominent in my own Flavor Town; my kitchen.

Back to the dulce de leche, which is literally translated as candy of milk, or milk candy. The Dominican Republic version is made with equal parts milk and sugar with cinnamon, and the texture is a lot like fudge. Now. What was I going to do with it? I know that it is often used to flavor cakes and cookies. I've also seen toffee-like dulce de leche candies. But the weather is warm, the flowers are blooming, the tank tops are out, and when Fred and I looked at one another we knew. It's ice cream time. 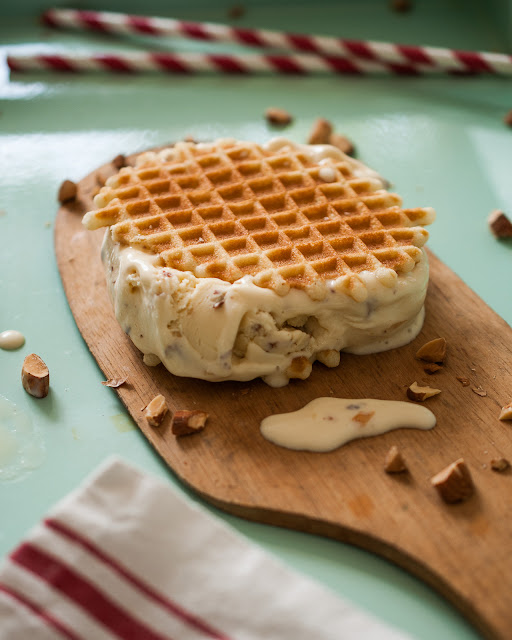 Which is great, because that is all Fred. Fred is the ice cream man, and everyone who has eaten his ice cream will agree. He has a way. And when I say he has a way, I mean to say he has a French (or sometimes Italian) way. Fred is not afraid of the egg yolk. And considering eggs are so the new bacon, which is to say, wicked hip, why should he be? I guess my Fred is wicked hip.

To elaborate, French ice cream is made with egg yolks, so it's thick and custardy. Both French and Italian ice creams are made this way, while the French use a bit more cream to milk and Italy more milk to cream. Whereas American ice cream (also called Philadelphia-style) is made with sugar, milk and cream. No eggs. European ice cream is richer, silkier and it doesn't develop nearly as many ice crystals as its lighter cousin. And when I say cousin, I mean to say the kind of cousins that don't much care for one another. The French hate American ice cream.

Fred's ice cream is no joke – sweet, decadent, thick and velvety. For his dulce de leche ice cream he also added some toasty, salty almond chunks for texture. For a small dinner party coming up he is making a pine nut ice cream with fresh strawberries and honey. I mean, come on.

And yes, he makes the ice cream with our new Guy Fieri spatula. Because we, in fact, are “Cookin' It, Livin' It, Lovin' It”. 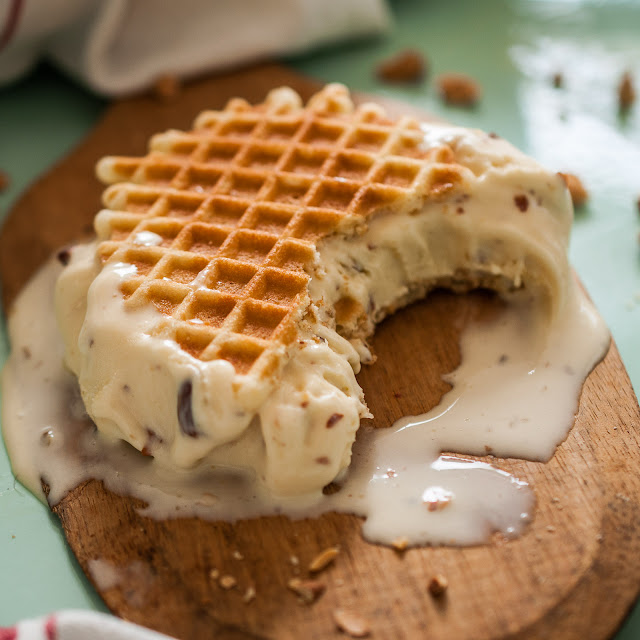 DIRECTIONS
Whisk together dulce de leche and the whole milk in a medium saucepan. Heat gently over medium heat until very hot, but not boiling. Meanwhile, whisk the egg yolks and sugar until light in color.

Slowly add the hot milk mixture to the eggs while whisking. Pour back into the pan. Gently cook over low to medium heat, until it starts to thicken and reaches 160 degrees F on an instant read thermometer. (Don't let it exceed 180 degrees, or it will curdle. If you don't have a thermometer, cook until the custard is thick enough to coat the back of a wooden spoon.) Strain the cooked custard through a fine mesh sieve into a clean bowl and add the cream.

When mixture is thoroughly cold, churn using your method of choice. Add almond chunklets to the ice cream when there are about 5 minutes left in the churning process. Transfer to a freezer safer container and freeze for several hours before serving.