Finally Fooding Around in LA with LQ@SK. 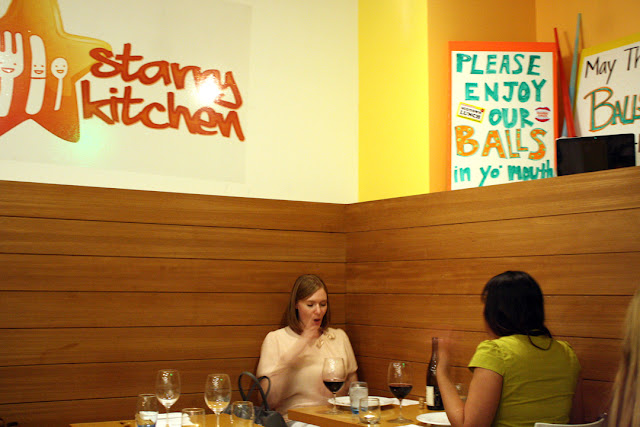 Last Tuesday night Chris and I had the distinct pleasure of experiencing that which is LQ@SK. In case you’re not yet familiar, here are the bare bones:

Nguyen and Thi Tran are the delicious duo behind Starry Kitchen which is mainly a lunch spot, and offers up dinner Thursdays and Friday evenings.

Sadly, Laurent Quenioux's Bistro LQ recently closed up shop. Since then, the Chef has continued his role at Vertical Wine Bistro, where he became Executive Chef late last year.

The three put their heads together and realized it would be a great idea to have Quenioux come in to Starry Kitchen and do dinners Sunday through Tuesday, when the restaurant is not usually open, every other week. Said dinners are five-courses (plus amuse) prix fixe menu, priced at a very reasonable $45.

This began the first week of this past June and is slated to last anywhere from three to six months. 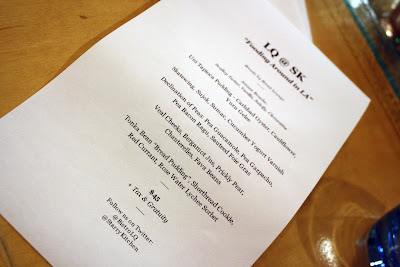 Why it took me this long to get myself in there is a mystery to me. And don’t even get Nguyen started on the pathetic fact that I have yet to experience Starry Kitchen during their regular hours. Trust me, I feel like a heel about it. Alls I can say is that it is very difficult for me to get downtown during lunch hours. I have no excuse about Thursday and Friday nights, however.

I swung through Domaine LA as Jill does the pairings. As she does so very. I wasn’t planning on drinking a whole ton and knew I had to make the drive back to my canyon from downtown, so I just picked up two half bottles; a 2010 Domaine Daulny Sancerre and a 2008 Foradori Teroldego Rotaliano. As a little thank you presley for a cappuccino delivery the week before, she also gave me a bottle of NV Musva Muscat for dessert.

And then I picked up Chris and we were on our way.

I was delighted to spy, the always affable, Julian at the pass, expediting, and Nguyen, sporting a faux stache, skipping about doing all manner of duties and dropping all manner of F-Bombs. We were seated immediately and given a small platter of bread and olive oil (bread from Bread Lounge) and had our Sancerre opened. The bread was moderately good, but really begged for a finer, brinier, sassier olive oil or a nice butter to go with it. 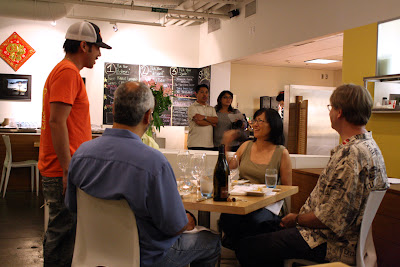 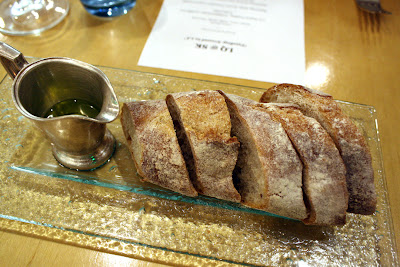 As I took that first sip of wine and took in the bright, friendly and warm surroundings, our amuse bouche appeared. This was Scallop Tartar, Vanilla, Salsify, Clementine. It was clean, precise, delicate and subtly flavored. I ate my scallop tartar entirely and then moved to the Clementine and salsify. I appreciated the division of the elements. Chris, however, incorporated all of the tastes into his bites and was confused by the Clementine. He found it overwhelmed the scallop. Potato-PotAHto... 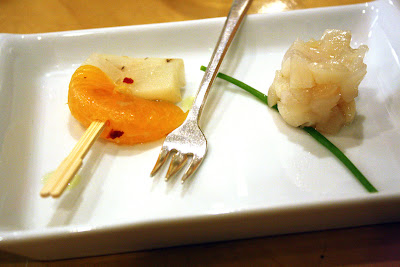 Next up we had Uni Tapioca Pudding – Carlsbad Oyster, Cauliflower, Yuzu Gelee. Uni is one of my most favorite things in all the land, so I was overjoyed that I was given a big, ole slab of it here. It was divine; sexy, musty, briny and unctuous. The oyster was a bit confusing. A bit busy. But I am admittedly an oyster purist. I thought this dish was seductive and lush and went exquisitely with the Sancerre. 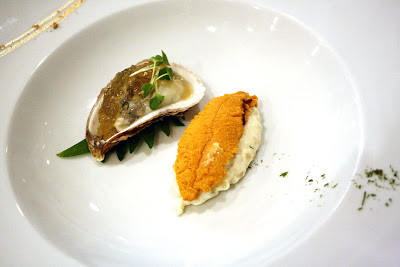 On to the Skatewing, Sujok, Sumac, Cucumber Yogurt Garnish. I honestly had no idea what to expect here, and what appeared before me still had me surprised. Pleasantly, I might add. It had wisps of flavors reminiscent of Armenian and Indian cuisine, but still managed to be floaty and elaborate. I thought it was a creative and intrepid dish. 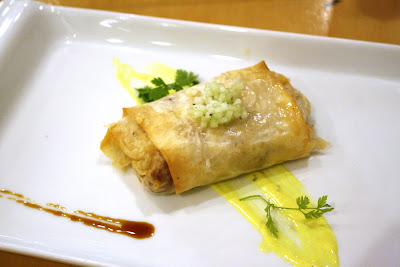 At this point we open the bottle of Foradori and the most intriguingly titled dish of the evening: The Declination of Peas: Pea Guacamole, Pea Gazpacho, Pea Bacon Ragu, Sauteed Foie Gras. I think our chef was having some fun with this one, in particular. He took his peas around the world. His peas were on celestial latitude, from France to Spain to Mexico. Terribly clever. 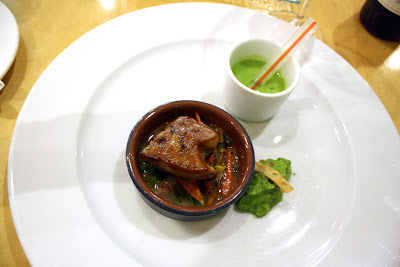 The guacamole was fascinating. It had only peas, yet tasted almost exactly as though it were prepared traditionally, with avocado. It was light, bright and fresh. I wished I had a couple more crispety-crunchedies to dip into it. The gazpacho was playful and lustrous. But the ragu and the foie gras was the show stealer. It was like a rustic, peasant bourguignon – but with that Tiffany’s gem of foie gras on top. I wanted a barrel of it. And Jill’s choice of red, that Foradori, could not have been a better choice. It was, simply put, perfect.

After a moment to catch our breaths from the excitement from the last dish, we were presented with the Veal Cheeks, Bergamot Jus, Prickly Pear, Chanterelles, Fava Beans. This was, perhaps, the most visually stunning dish – and also Chris’ favorite of the night. I loved everything about this dish from concept to execution, but the prickly pear threw me a bit. The only reason for this is my slight aversion to gelatinous, fruity elements in my savory dishes. This is my thing. My issue. But I tell you what, I still cleaned my plate. 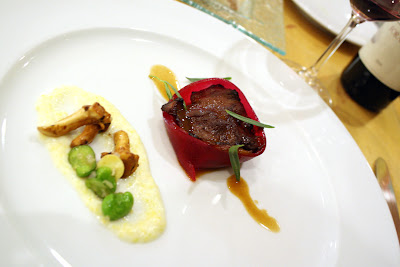 Timing-wise, things were perfect. We just finished up our wine as we finished up the veal cheeks. Time for dessert and Jill’s dessert wine, the Muscat (Yes, sweet. Yes, bubbly. Yes, delicious! This one is from Spain, courtesy of importer, Jose Pastor. And at under $15 a delicious bargain.) I figured, since the bubbles were a gift, I would share with the crew. 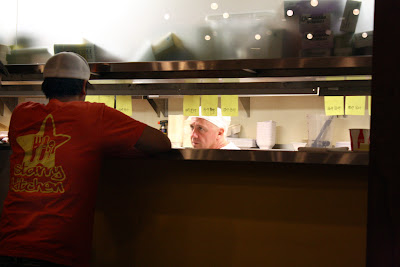 And so after a toast to the evening, Chris and I, with enormous smiles on our faces, dived into the Tonka Bean “Bread Pudding”, Shortbread Cookie, Red Currant, Rose Water Lychee Sorbet. While I’m not much of a dessert gal, this little morsel of bread pudding transcended coziness and the cool sorbet was supple and beautifully balanced. Not to mention his plating could have inspired a Miro painting. 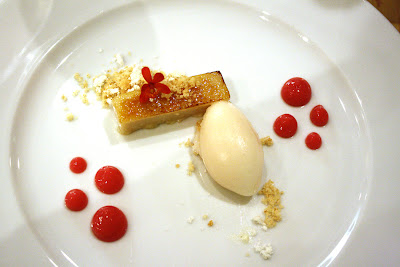 What a great evening and an even greater meal. I’ve always thought Quenioux has had mad skills in the kitchen. I was consistently impressed at Bistro LQ. To enjoy his food and his formidable attention to detail, to taste the fun he was having in the Starry Kitchen kitchen, with Nguyen, proudly and, shall we say, enthusiastically explaining all of the dishes, Chris and I absolutely enjoyed every part of our evening. And all for $45?! 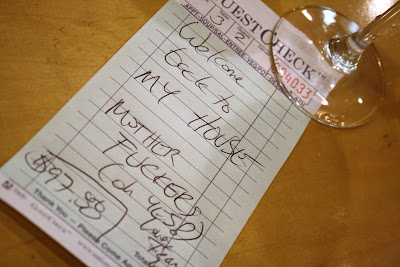 Chris called me the next day to thank me for turning him on to this pop-up. He also told me he had already made a reservation for the next round. He wanted to take an out of town friend who is quite the food enthusiast and is rumored to have an impressive palate.

I will try to get myself back as well. But not before I make it my beezwax to go to Starry Kitchen proper. I promise.