I Left My Heart in San Fran-Cheesy; Part 1, Thursday. 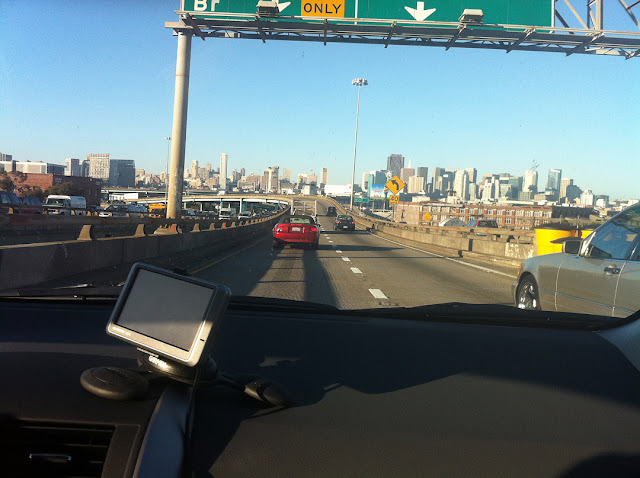 Although I am itching to deviate, temporarily – as I do – from the restaurant writings, as there seem to be a few in a row at present, and I know everyone is just waiting with bated breath for my next story about how some very personal chunk of my life relates to one of my recipes, which I then share, I would be remiss if I didn’t discuss my recent trip to San Francisco and some dining out experiences with you.

Was that run on sentence?


Anyway, that being said, you will all have to wait a bit longer for my celery root soup with sunchoke “croutons” recipe.

Ever since food found such a prominent, and dominant, part of my life, I have wanted to go to Chez Panisse. But, as I have been able to travel little in the past seven or so years, it has not been checked off the list. Until very recently, that is.

A month or so ago I decided I was going to bust a move up the coast for one of my culinary adventures. I had fully intended to go at it alone until one night, after blathering on about my plan to Minty, it was decided: we were going to team up and conquer the food and cocktail scene in San Francisco together.

And so, two weeks ago, in my rented Toyota Corolla (my car would never make the journey, nor would anyone want to spend that much time in it), Minty and I hit the road. She, with her weekend bag. Me, with the suitcase I used when I spent two weeks in Europe – full. I am the world’s most horrible packer.

We were all set, cruising up the I-5N, had my iPod playing tunes, us, chatting away. About an hour and a half to two hours in, I look down and notice A. I’m going about 90 miles per hour, B. I have no actual clue what the speed limit is, and C. Regardless of the speed limit it is almost certain that I am speeding. And, D. right at that crucial moment, I also decide to pass the car in front of me. That car was a cop. First speeding ticket ever, check.

The remainder of the drive was glitch free with the exception of coming frighteningly close to running out of gas only moments after the whole ticket affair. Hey, I don’t proclaim to being that awesome of a driver. Just take a look at my car sometime.

Well, rest easy, we made it there alive – and in amazing time! Upon arrival, I wanted coffee. Minty led us to wine. Oh, I suppose I can have a glass of wine. Or two.

After settling in at our host, (and Minty’s friend) Carina’s place and having a little time to freshen up, the three of us headed out, on foot, to dinner. It was a beautiful, crisp night and I thoroughly enjoyed every second of soaking in the air and the city during our walk.

That night we dined at Heirloom Cafe. The girls wanted to go to Frances, but as the wait was a bit, ahem, excessive we continued walking until we arrived at Heirloom. The girls were sweet. They knew my style was along the lines of sustainable, local, simple food – and they wanted to cater to it. Again, very conscientious of the ladies.

Heirloom was right up my alley. It actually reminded me, aesthetically, of a lot of the restaurants/cafes/bistros I grew up eating in back in Richmond. Small, and intimate, with wooden floors, vintage wall-paper, high, tin-stamped ceilings, and an airy, rustic feel. It also felt like Richmond in that we were the only guests under 50 years-old in the house. Interestingly, I discovered later that Heirloom, which opened up in the Mission District less than a year ago, is the brainflower of Matt Straus, former wine director at Wilshire and Grace, right here in sunny Los Angeles. 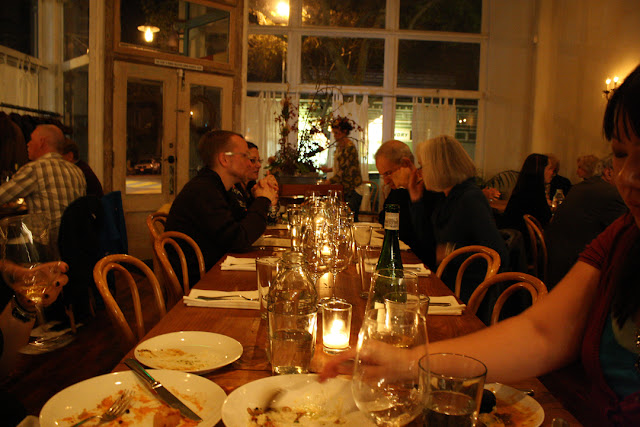 We were seated at a long, communal farm table that extended along the length of the middle of the room.  The wine list was tremendously impressive and about as big as a Tolstoy novel. After some dialogue with our affable server, we selected a beautiful, warm and rounded 2001 Savennieres, Baumard, which ended up pairing very nicely with everything we had to eat.

I thought the menu was small and precise. I always appreciate a tight, confident menu. We started with the Dungeness crab, endive, brioche croutons, lemon emulsion ($14), and a fresh linguine with shaved black truffles (I don’t recall the price). I was tremendously fond of the fresh, tart, and spritely salad. Those buttery, brioche croutons made me smiley from the inside out. 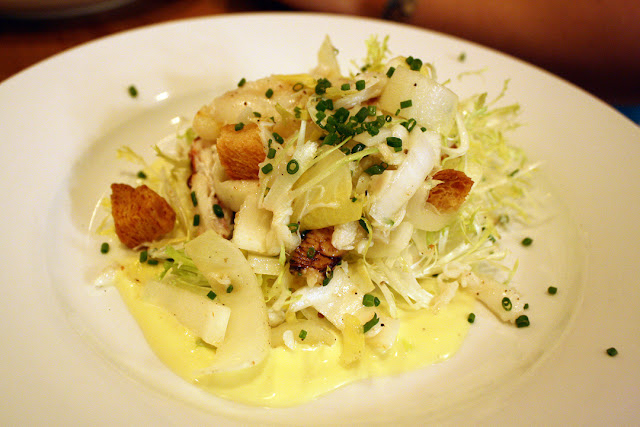 I am on an extreme pasta kick right now, and this was pretty great. The noodles were delicate and sanguine. And who can argue with a shaved, black truffle, especially in January! I could have had these two dishes all to myself, with that bottle of Savennieres and been fully sated and absolutely happy. 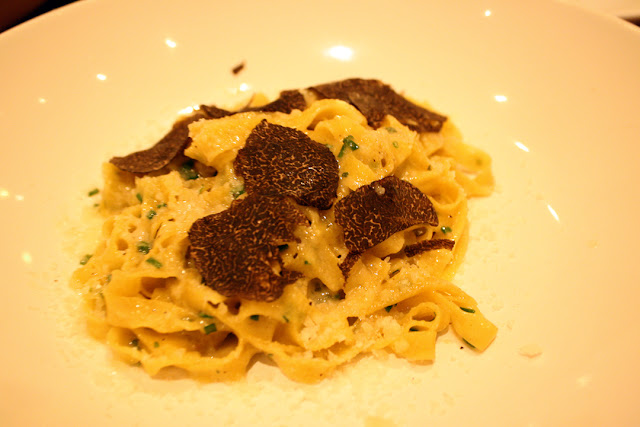 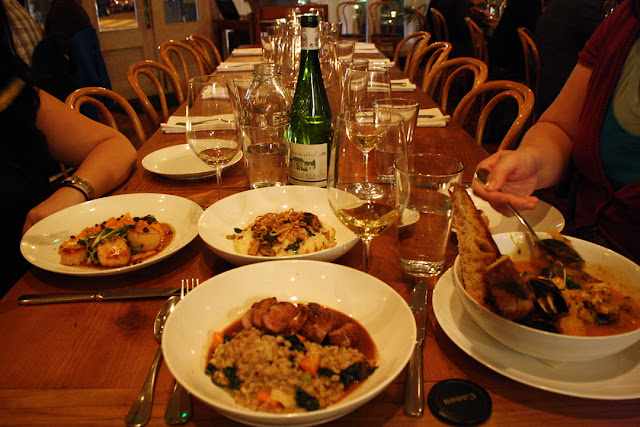 The duck, sadly, was a little disappointing in that it was under-seasoned. It was, however, cooked to perfection and its accoutrements were delightful. I loved the farro and port. Minty’s fish soup had a bold, beautiful broth and was chock full of fruits of the sea. I love fennel. I love saffron. I love seafood. I don’t normally opt for Bouillabaisse-like dishes (you never know what might float to the top), but I enjoyed my tastes of this dish. The risotto was outstanding. It was perfectly toothsome, slightly sweet, earthy and incorporated a perfect ceremony of color, taste and texture. I enjoyed Carina’s scallop dish as well. The scallops were spot on, but while I appreciated the brown butter, I was not necessarily a fan of the currants and sweet mash as plate partners. I realize I am a bit of a nut with the fruity stuff and my sweet and savory getting too muddled, but I honestly was just unsure about this dish conceptually, as a whole. I will add that I was alone with this opinion. 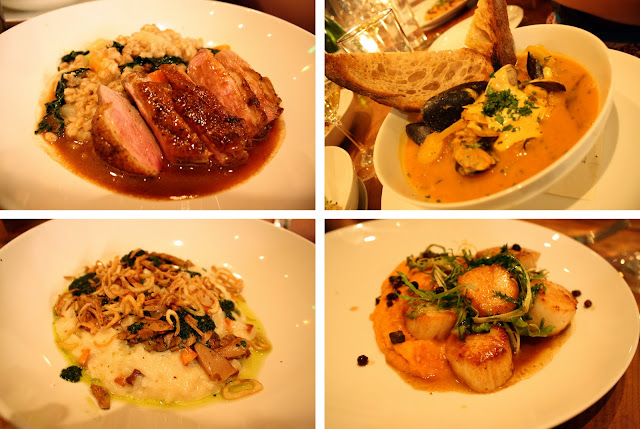 And this brings us to dessert – not something I normally indulge in, but what the hell - it was vacation. We got the apple and pear butter cake and a play on the Oreo, a cake-like concoction called o Ree Oh Or ee oHH cake. I loved the actual cake part of the pear and butter cake. The chocolate-y o Ree Oh Or ee oHH cake was fun, but by this time I needed a wheelbarrow to roll me out. Stick a fork in me, I’m done – you know? 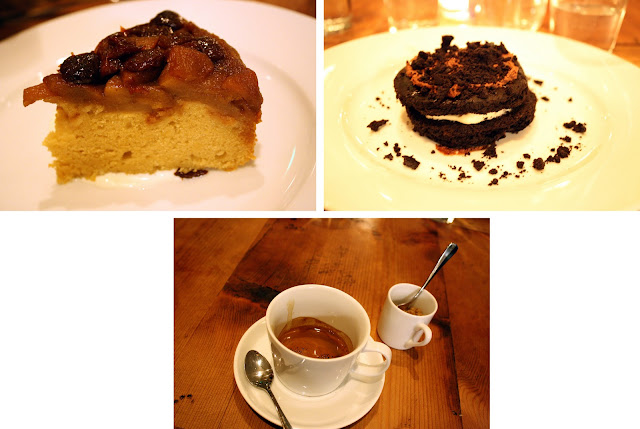 Good stuff, Heirloom. If and when I return to San Francisco, I will return to you.

After dinner we met up with Donovan, a friend of Carina and Minty’s, and headed to a couple of bars where we bellied up and finished out the night. I recall a cute bartender at our second stop. I recall a cab ride home. I recall a sound night of sleep after a long drive and our first night of our adventure. I recall a couple of girls with tiny (ahem) hangovers the next morning.