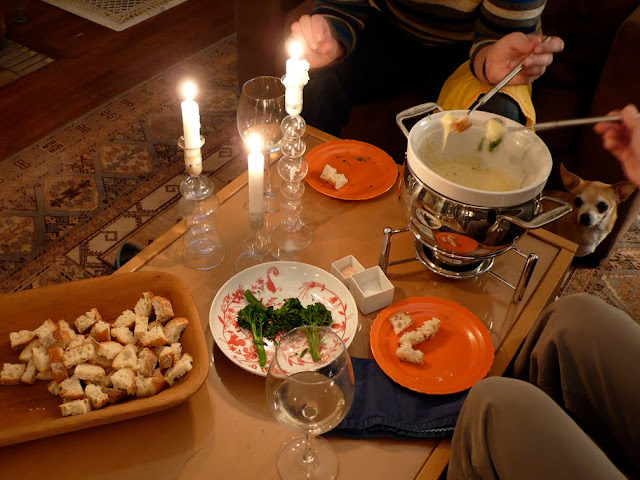 Occasionally I get a brain flower and announce these bold statements to anyone who will listen. “I’m going to get a gym membership and work out 3-5 times a week!” or “This is the year I learn how to use jumper cables and change tires!” or “I’m going to watch Werner Herzog’s entire catalogue this month!” or “I’m going to bring back fondue!”

More often than not these things are never realized.

About 5 or 6 years ago I assertively declared (more than once) that I was, in fact, going to bring back fondue. Now, I don’t know where I thought fondue went.  Perhaps it was hiding in someone’s attic, along with their old tunics and issues of Good Housekeeping. Regardless, I was bringinnit back. Reinventing it. Modernizing it. Making it cool. Or so I said (more than once).

One Christmas, much to my surprise, my friend Heather gave me an All-Clad fondue set as a gift. Admittedly, I was shocked that anyone actually listened to me and my fondue braggery. Or any of my crackpot ideas for that matter. In any case, I was really excited and became even more audacious about a Fondue Night that I was to orchestrate for all my friends and, of course, Heather.

I guess you can guess what came of that. Zip.

So a few weeks ago, while having dinner at Heather’s new house, she decided to get something off her chest: “You know Elliott, I have to admit that I was pretty upset and insulted that you never used the fondue set I gave you all those years ago.”

Well, crap. I felt horrible. And it’s true – that fondue set has been parked in my cupboard for half a decade, along with a fondue cookbook and a vintage fondue set from another friend who also made the mistake of falling for one of my fondue-blathery moments.

But at least I have always, and continue to, make good use of the martini glasses Heather gave me the next year?

Anyway, you guessed it – six years in the making, with far less fanfare than one would have thought – Fondue Night was realized. Heather came over in the afternoon and helped me find an appropriate recipe. She is not a bells-and-whistles-with-her-food kind of girl. She eats hot dogs with NOTHING on them, salad consisting of only lettuce and a dressing of oil and salt  (just a little bit and sometimes none). You get the idea. So my grandiose plans of a rosé fondue or to incorporate shallots were shot down immediately. This was probably smart as it was my maiden fondue voyage. Best to keep it simple, learn the rules before you break them and whatnot.

Interestingly, Heather has only a few taste memories from her childhood from what I can tell. Popovers and fondue seem to be the biggies. And it’s true. My recollection from our high school days include those items plus homemade popcorn and experimental salad dressings (maybe that’s why she doesn’t like fun dressings now?). So it was important to her to keep the recipe as classic as possible. And after all these years I didn’t want to rock the fondue boat, so to speak. I will say I sneaked a smidge of truffle oil in at the end.

It was great fun. Heather grated the cheese and chopped the bread while I rubbed garlic in the interior of the pot and mixed the cornstarch with kirsch. We listened to the Pharcyde’s second album, sipped wine and enjoyed the preparations in my little kitchen. I occasionally consulted with her as to the consistency of the fondue since she had such a strong memory of it. It was good kitchen give and go.

An aside: I think I have actually only ever had fondue once in my life. It was at a Melting Pot in Jacksonville, Florida. I’ll leave it at that. Perhaps that’s why I have assumed fondue was in dire need of being brought back.

We set up our dining operations in the living room around my coffee table as it felt more communal, noshy and less formal. Even though I violated Heather’s fondue taste memory by including the truffle oil, I think we pretty much achieved what she remembered as fondue. Hell, I guess that means I did it. It may have taken slightly longer than I may have implied – but I brought back fondue! Take that, world!


Although I quite enjoyed this recipe, I am eager to experiment with more and different ingredients in the future. A champagne fondue, perhaps? Maybe even a brie and wild mushroom fondue! So look forward to more fondue stories to come…

Rub interior of a medium stainless-steel pot with garlic clove, then chop garlic. Add garlic and white wine and bring to a simmer over medium heat. Add gruyère cheese and nutmeg. Cook, stirring with a wooden spoon, until cheese melts (cheese and wine will not yet be blended).

Combine cornstarch with kirsch in a small bowl. Mix thoroughly and stir into cheese mixture. Continue to stir and simmer until cheese mixture becomes smooth, about 5 minutes, then season with salt and freshly ground black pepper, adding up to 1/4 cup more wine if fondue is too thick. Drizzle with truffle oil.

To serve, transfer to a fondue pot set over a flame. To eat, spear bread pieces and broccoli florets with fondue forks and dip in cheese, continuing to stir with forks as you dip.