Better than snuff, ain't half as dusty. 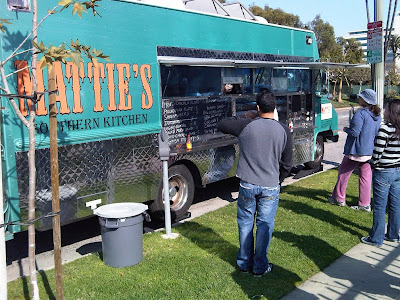 Although they have only been around for less than a month, I have been as anxious as a long tailed cat in a room full of rocking chairs, for what feels like eternity, to try Mattie’s Southern Kitchen. My friend, Yvonne, is a friend of Chris, the owner, and got me all geeked about it in the first place. And, in case I have not mentioned it this week yet, I am from the south and am always looking for edible nostalgia. 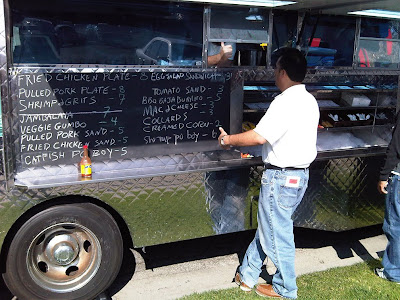 I called my friend, Heather - whom I have known since high school. I thought she’d appreciate the theme of this truck. Plus, it was her first food truck! So, with mounting excitement, I drove to meet her at Miracle Mile to give Mattie’s their day in court.

As they say on their blog, “We don't serve soul food. We don't sell comfort food. We sell southern food.” I for one appreciate identifying that distinction, as the three are disparate.

Here is a list of what their menu offered up this past week:

Although the woman taking my order suggested the Shrimp Po Boy (“because they only had one roll left”), I went for the fried chicken plate with creamed corn, collards and a biscuit ($8). Heather got the fried chicken sandwich ($5). I wish she had ordered something wildly different than me but c’est la vie. The line was thin and the food came out lightning fast. Upon my compliment regarding the pace the guy in the truck simply said, “That’s the name of the game”. Cute.

And so I grabbed my spork (who doesn’t love a spork?!) and some napkins, and Heather and I scurried to a little wall to sit on to enjoy lunch. 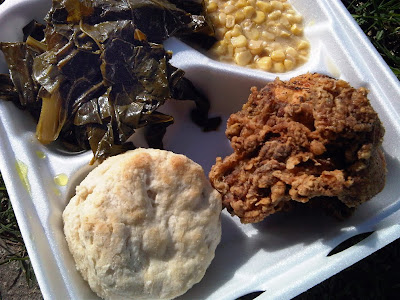 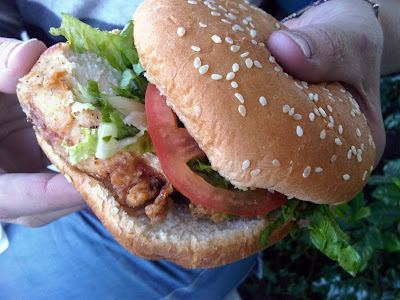 First off, this was a gracious plenty of food for $8. It reminded me of the classic meat and threes I used to love when I lived in Atlanta, and it looked just right. I was impressed. I immediately dug into the collards, which I had seasoned with a bottle of peppery vinegar they offered at the truck along with some hot sauces. Spot on. Cooked down long enough, but not too much, with a perfect salty brine. The creamed corn was not exactly creamed, but was still really tasty. I’m used to unrecognizable kernels swimming in butter and cream. This side still retained its status as vegetable, which is smart. It had a nice sweet and smoky flavor and still was as buttery as I wanted. The chicken was good. The crispety skin was plentiful and seemed to be the result of nicely rendered oil, which I always appreciate. The meat was cooked perfectly, retaining its moisture. My only misgiving would be that I prefer a little more kick to my fried chicken skin - use a bit more pepper, perhaps? It’s a minor beef, actually. Everyone thinks their mom makes the BEST fried chicken – even if it’s exactly the same as, say, Mattie’s. Welcome to the south. Hell, we still think we’re fighting the Civil War down there.

Interestingly, the piéce de résistance turned out to be the biscuit. Both Heather and I were flabbergasted over how moist, flaky, fluffy, melt-in-your-mouth, perfect these were. If available, I would have added butter (hey, I’m from the south), but these needed none. Recipe please!

I deeply regret not trying the sweet tea about which Zagat wrote, “essentially a glass of sugar moistened with tea, a demi-beverage to gladden the heart of anyone from south of Mason-Dixon.” I also was sad to not see the fried pickles on the menu. But I shall return. I NEED to try the shrimp & grits and the mac & cheese.

So to Chris and the rest of the gang, from the bottom of my stomach, thanks y’all!