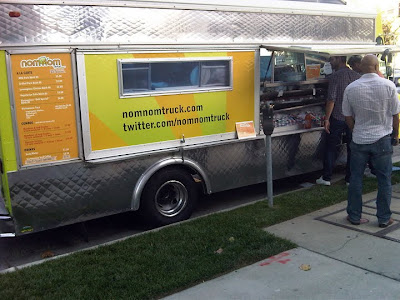 I knew I had plenty of time to get to the Nom Nom Truck, today. I also knew, even if they left early, I probably would still have an alternative in the area. What I did not anticipate, however, was the presence of THREE (3) other trucks, on the same block - all of which I am totally stalking! Why does the world force me to make decisions? Well, I suppose the mission was for Nom Nom, so Nom Nom it was.

As I stared in wonderment at the menu, curious as to what is involved in a Banh Mi (but knowing that I would order it regardless), another person in line asked me what the Banh Mi was all about. At least I'm not completely alone in the world.

After a brief chat, the other Banh Mi initiate ended up joining me, so I was able to try his grilled pork tacos. Fortuitousness! I, of course, returned the kindness by sharing my pork spring rolls. Yes, there was a lot of pork at this lunch. 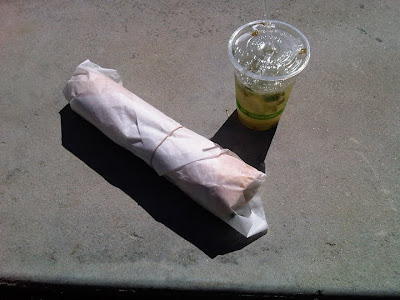 Just so we're all on the same page, a Banh Mi is a Vietnamese sandwich served on a baguette made with wheat and rice flour. Mine was stuffed with thinly sliced cucumber, pickled carrots and daikon, chopped onions and cilantro. It has a mayonnaise-like spread that is a mixture of egg yolk, cooking oil/butter and various spices. Their grilled pork version was recommended over the bbq pork for it's marinade, which was, in fact, exceptional. 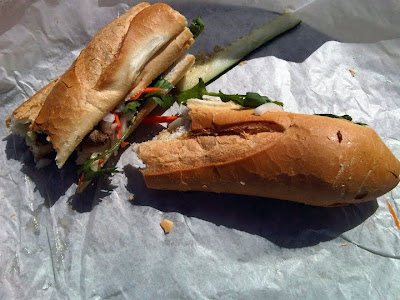 The tacos and the spring rolls did not give the same thrill, however. The flavor of the spring rolls was complex and multi-layered. The meat was delicious as was the dipping sauce, but as they were made, in advance, earlier in the day, the rice paper had seen better times. We both found it to be a little off putting in the chewiness department. The tacos were merely uninspired and almost an after thought with all of the other elements in play. The basil-mint lemonade was fantastic and refreshing. Simple and clean, with the perfect combination of sweet and sour. 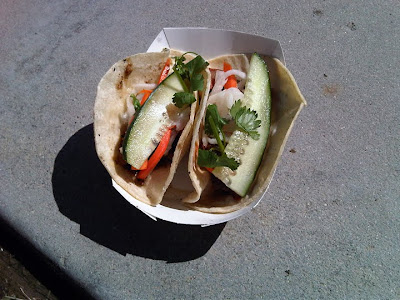 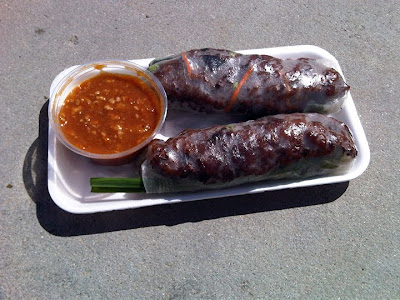 Honestly, I was mostly underwhelmed with the whole Nom Nom experience. Perhaps I was a little distracted as, unlike today,  I usually do my food trucking solo. Maybe I wasn't concentrating on the food as much as I should have. The sandwich was, decidedly, good but I doubt I will feel any push to return any time soon. I will also add that, clocking in at $11.50 for the lot, it was, by far, the most expensive food truck I have experienced to date.


And don't get me wrong, dear readers, if any of you stumble across me ambling along on my food truck mission, please say hello. Join me, even!

*Food styling credit in the taco shot goes to my Banh Mi buddy from today. Note how the cucumbers glisten just so...