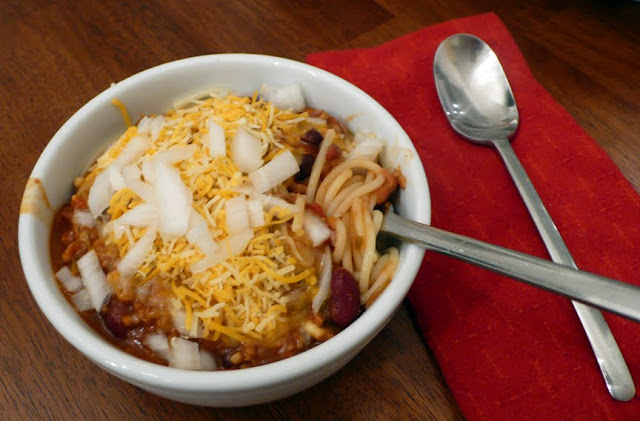 According to Wendi Williams on The Importance of Tradition, "Tradition is generally defined as long-standing beliefs, practices or customs that have been handed down from one generation to the next. Every culture, every race or group of people have their own rich customs and traditions." Tradition has several key elements. First, tradition involves a group of people; it's collective and social in nature. Second, traditions have guardians such as historians that have access to the knowledge or the truth of tradition's sacred rituals. Third, tradition stirs emotion within individuals to bring about a greater sense of self-awareness. In some cultures, these rituals are important to one's self-identity within the context of a larger society.

Dixon used to have a roommate that, it seemed like, every evening made the same dinner. She would flitter through the living room, tinker about in the kitchen for a while, and flitter away with a steaming plate of mystery food. What was on that plate and was it really so good that it begged to be eaten with such frequency? I was intrigued. Months later, I finally asked what it was on that plate. In her chirpy voice, she said simply (as though it was obvious), “chili spaghetti!” right before she, again, disappeared with her goods and left me just as perplexed as before – if not more so.

You see this is not just a bowl of chili. Oh no. This is chili served over spaghetti. There are even several restaurants and fast-food chains in the Cincinnati area – and even in other parts of Ohio, and into Kentucky, Indiana and Florida – that serve this bizarre heap of foodstuff. One of these chains, Skyline Chili, boasts the “3-Way Chili” as their signature dish: “Steaming spaghetti, covered with our original, secret-recipe chili and topped with a mound of shredded cheddar cheese.”

I went to college in Ohio for four years and was never privy to this concoction that is their regional fare, officially called Cincinnati Chili.

According to the Greater Cincinnati Convention and Visitors Bureau, Cincinnatians consume more than two million pounds of chili each year, topped by 850,000 pounds of shredded cheddar cheese.

Who knew? I guess I didn’t dine out much during my tenure in Ohio.

April has long since moved from Dixon’s place and she and I have remained close, to this day. We dine out and in, sometimes we cook, but nothing too ambitious - yet. And sometimes we just order pizza, watch BBC and drink too much red wine. However, for quite some time, now, I have hounded her to make her signature dish for me. Why won’t she do it? I feel like there’s some secret chili sect that knows something I don’t. I want in! I MUST be missing something truly remarkable and divine, right?

Well, joy of joys (as though you don’t know what’s coming next), April made me her chili spaghetti!  It’s true. Just last night I went over to her house, with my camera, pen and paper, to document the process of this revered Cincinnati concoction.

I must say that last night was a blast. Over a beautiful bottle of rosé and jazz, April happily chopped veggies, explained the process, and shared stories of her chili spaghetti – related, childhood in Cincinnati. Her family even dined at the famed Skyline Chili and Gold Star Chili restaurants, she told me with pride. She went on to say, a little wistfully, that her mom would order the “3-Way, Bean” to avoid that pesky onion addition in the “4-Way”.  Her dad would order the “5-way” (the full monty) sometimes with extra chili even AND a cheese Coney.

Last night, all the way from Cincinnati to Hollywood (by way of Texas), April continued a tradition from her childhood, her identity, and passed it along to me. I was touched. By the way, we went all out: 5-Way style.

So I’ll say it. I’m a fan! It was outstanding, full of richness, flavor and texture – and good heat. I wasn’t sure about the actual chili and pasta union, but wonder of wonders, it worked! I loved the hot, melty cheese on top with the fresh, crunchety, chopped white onion.

I will add that (in addition to being a Texan (post Ohio, pre-Los Angeles), hence the mass pepper influence in the recipe)) April has been a vegetarian since the age of 14. So she used texturized vegetable protein in lieu of ground beef. I found it astonishingly good, and didn’t miss any body, texture, or saltiness in the substitution. It was robust and delicious. Another surprise was the wine pairing. One would think a powerful red would be in order. But, as it was an unusually warm evening, we went with the 2008 Urban Uco Sauvignon Blanc, from Argentina. We both agreed that it’s acidity and tart crispness cut through the weight of the dish and its grassiness a great compliment to the tomatoes.

I always say sharing is caring. So to keep the tradition alive, be it April’s or Ohio’s, I am sharing with you, April’s Chili Spaghetti recipe. I hope it brings you as much pleasure as it did the two of us.

April told me she usually prefers to use spaghettini, but last night we used spaghetti. She also tells me that this dish is even better the next day. 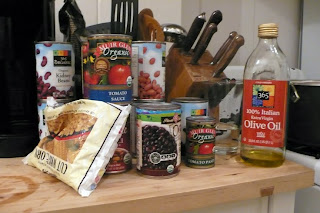 Sauté yellow onion, green, yellow and jalapeño peppers in olive oil until they are tender, about 7 minutes. Add the garlic, texturized vegetable protein, and Roma tomatoes and muddle the ingredients together. Sauté until tomatoes are falling apart, about 15 minutes. 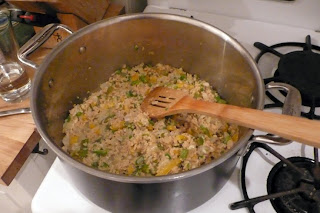 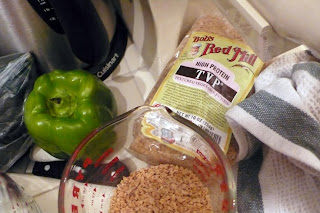 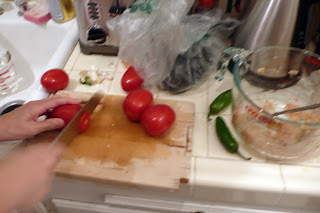 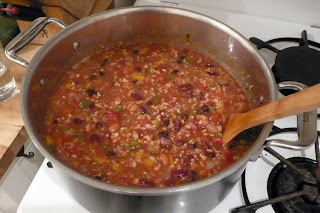 Meanwhile boil spaghetti until it's al dente, about 10-12 minutes. 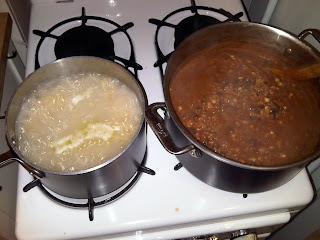 Serve over spaghetti and top with shredded cheese and your choice of chopped white onion, sour cream and oyster crackers.

*I should add that April does not support my mention of sour cream anywhere in this recipe.