Greenspan to Ludo: I believe I Can Fry. Ludo to Greenspan: Let’s Fry Away, Together. 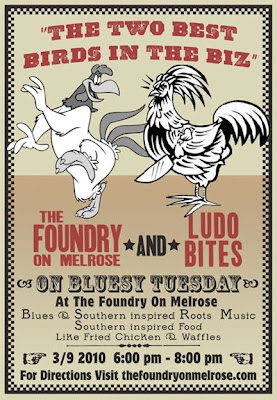 Typo on the date above, fyi.

Last night, to add a little intrigue to Bluesy Tuesdays at The Foundry on Melrose, the famed Ludo Lefebvre shacked up with Foundry chef Eric Greenspan to fry up some chicken. Interestingly, the genesis of this chicken dinner came on Friday, when Lefebvre swung by The Foundry for dinner, only to find that Greenspan had been called away from his stoves (apparently Greenspan was moving a couch at the time). A Twitter exchange later, and Lefebvre had booked himself for a night of cooking.

As is de rigueur these days, word spread like wildfire via the Twitterverse, causing foodies, bloggers and critics alike to scramble for a coveted reservation to experience two great chefs play chicken. And I was one of them.

Brandon and I arrived promptly at 9:30pm, as per our reservation time, and were seated immediately. It wasn’t nearly as nutso in there as I would have thought – it was quite calm, actually. We were originally seated in the back dining room, but I requested we move to the front room, which was a bit more spirited with the live music. And I could watch the chefs and the kitchen from my new perch. Not a problem. Our server happily accommodated us (me). 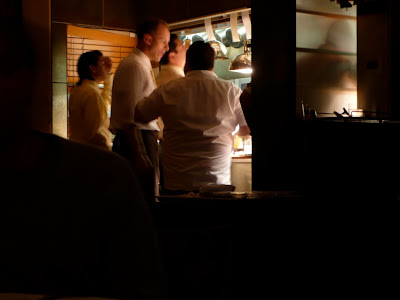 Brandon and I ordered a smattering of items from the Bluesy Tuesday menu and a bottle of Sauvignon Blanc. But let’s cut to the chase. The chicken. One plate, 2 pieces of chicken from each chef, $6. 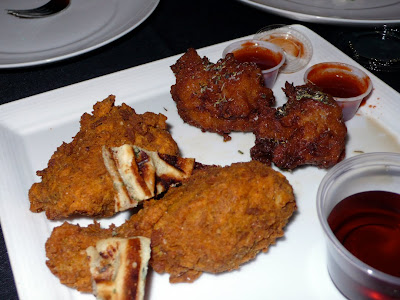 Greenspan's in the foreground. Ludo's in the background.

Ludo’s fried chicken (LFC) was in the form of nuggets, with brined dark meat. The crispety, crunchety, rosemary and herbs de provence seasoned skin (which is really the most important facet of fried chicken, right?) was simply fantastic. And was this fried in duck fat? Oh, hell yes! These were accompanied by a tangy, sweet and spicy piquillo sauce that I could have done shots of. Ludo’s chicken was overwhelmingly robust and flavorful - and the meat was exceptionally moist and tender. Mr. Gold is right: this may be one of the 99 things to eat before you die. Perhaps that’s also why he sauntered through the door moments after us last night…

Greenspan’s chicken was a force to be reckoned with, however. He offered up a drumstick and a thigh with a buttermilk crust and meat that literally fell off the bone. I was impressed that he re-imagined the chicken and waffles concept by accompanying his chicken with maple syrup and goat cheese waffle segments.

Interestingly, while I preferred Ludo’s chicken – primarily because of the dark meat, Brandon opted for Greenspan’s – primarily because of his chicken and waffles concept. He felt that while Ludo’s chicken was “the tenderest chicken I’ve ever tasted”, that it was otherwise uninspired without the accompanying piquillo sauce (which, he also thought, by the way, completely changed the taste of that chicken into something new and magical.) We did agree, though, that both were fantastic.

And I must mention a special, little gem about our plates of chicken. They each came with moist towelettes! I cannot possibly express how happy that made me. There should be more moist towelettes in this world.

Another standout item of the evening, and something worth mentioning, was Greenspan’s Cornbread Pudding with crème fraiche ($8). It usually is also accompanied with a jalapeño jam, but they had run out. As a Texas expat, Brandon ordered the dish solely because the word jalapeño was inserted into the description. But this dish was so moist, both savory and sweet, and divine, that even he didn’t miss the jam.

So, a bottle of wine, an amuse bouche from Ludo, fried green tomatoes with watermelon and blue cheese, a potato soup with a soft egg, cornmeal pudding, the fried chicken and $70 later, Brandon and I were sated, happy, and full of warm fuzzies. Nothing beats a fantastic meal with a friend.

And I have to give him big ups for humoring my excited anticipation for two days, making us move tables, having to witness me geeking out over seeing the chefs in action, and worst of all, taking pictures with the flash at the dinner table. Well, at least I paid.